Teacher Reads from Her First Book of Poems
Votes

Teacher Reads from Her First Book of Poems 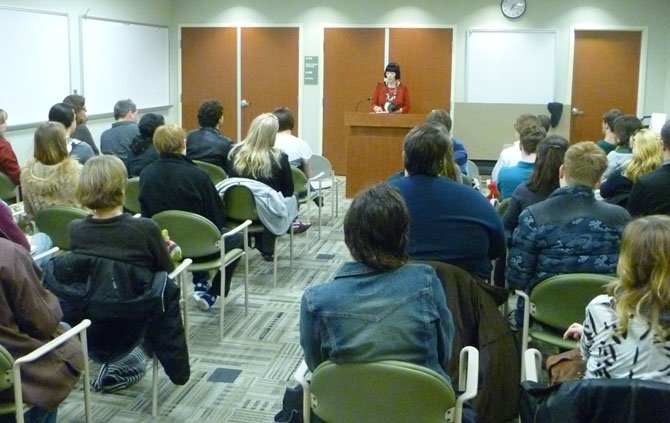 Yorktown High School English and creative writing teacher reads from her first book before a crowd of about 50 people. Contributed

Yorktown High School English and creative writing teacher Melanie McCabe read a selection of poems from her first book, “History of the Body,” at Westover Branch Library on Monday, Jan. 7.

The collection was published by WordTech Communications in September 2012. McCabe’s has also had prior work published in “Best New Poets 2010,” edited by Claudia Emerson, and has won various awards, such as second place in the 2009 Literal Latte poetry contest.

Describing “History of the Body,” McCabe said, “It deals with the body as a child, as a young woman, getting older. I hope a broad scope, how one relates to one’s own physical self.”

McCabe has read from her collection before, but for this reading, she selected some poems she hadn’t read. One such poem was “This Ritual,” which she used to think was too sad for an audience, but she included it after receiving a number of requests.

“The poem is about hanging on to pain instead of letting go of it, because it is all that remains to bind us to what or whom we lost,” McCabe said in an email. A line from the poem reads, “Time will heal every break if we give in and let it.”

McCabe also read poems that were lighter in tone but still had a more serious message.

One such poem was “These Songs,” which is about singing in the shower to a mix tape, but also, according to McCabe, “about the liberation experienced in relating to music when no one is watching.”

Another such poem was “Missing the Train,” which is from a new manuscript McCabe has submitted to various contests and publishing houses in the hopes that it will also become a book. The poem recounts the time McCabe spent dancing in front of the TV while watching “Soul Train” as a teenager. McCabe said that is was also about her desire to be someone cooler and hipper that she really was.

McCabe said the theme of the new manuscript, titled “What the Neighbors Know,” is people’s attachment to place, and one of the poem’s she read from it, “Valediction,” was inspired after she recently moved away from her house of almost 30 years.

“Valediction” is written to the house as if it were a person, and the speaker talks about how she’ll hate the people who move in, thinking of the changes they will make that will make the house less the speaker’s own.

About 50 people attended the reading, most of whom McCabe said were former students as well as some parents and fellow teachers, but there were also some unfamiliar faces.

One of McCabe’s creative writing students, Emma Youcha, said her favorite poem was “These Songs” because she sings in the shower as well. Arlington resident Jessica Kaplan’s favorite poem was “Missing the Train.” “It took me back to my youth,” Kaplan said.

Some of the oldest poems in “History of the Body” are from McCabe’s thesis for her master’s of fine arts in poetry, which she earned in 2005 from George Mason University.

The suggestion to focus the body also came then from a friend and poetry professor who saw that many of McCabe’s poems were already on the subject. McCabe said that she also wrote a good number of the poems between 2009 and 2010.

McCabe said she had some favorite authors and poets she admires a lot, but that they didn’t necessarily influence her writing style. Her favorite poet is Emily Dickinson, whose poetry is exceptionally formal and has definite meter. McCabe’s poems, however, are written in free verse — not consistently following patterns of rhyme or meter. But, McCabe did say her poems could be considered formal in that they are usually symmetrical.

“They look like they have a certain form to them,” she said. “But, if you scan the line, it’s not in meter. I like more freedom in what I write.”

McCabe said she also admires contemporary poets like Louise Gluick and Claudia Emerson. Emerson, a Pulitzer Prize winner, also wrote one of the reviews of “History of the Body” that appears on the back of the book.

McCabe has been teaching at Yorktown since the 1999-2000 school year. She received her master’s of fine arts in poetry and her master’s in education from George Mason University in 2005. Before she became a teacher, she worked in advertising and publishing.

“But, it wasn’t as satisfying to me as teaching is,” she said. “There’s a lot of satisfaction in working with people and seeing reactions and results. It’s very immediate. It’s great working with young kids. The cover painting of “History of the Body” is by McCabe’s daughter, Taryn Riley.

“History of the Body” is available for purchase on Amazon.com. Upcoming readings by McCabe are scheduled at Minas Gallery, Baltimore, Md., Feb. 10 at 4 p.m.; at One More Page Books in Falls Church on March 4 at 7 p.m., and at Takoma Park Community Center, March 21 at 7:30 p.m.