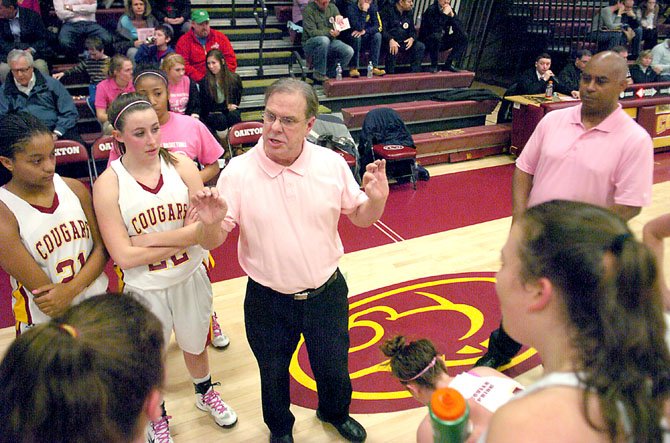 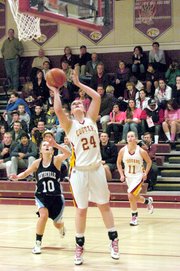 Vienna — The Centreville girls’ basketball team, owner of an up-tempo style and winner of 14 of its first 15 games, approached Friday’s contest confident it could beat Oakton despite a losing streak against the Cougars dating back to 1995.

But after the opening tip, the Wildcats’ confidence turned to timidness against 6-foot-1 Oakton senior Elizabeth Manner and the eight-time defending Concorde District champion Cougars.

Manner scored 37 points and grabbed 14 rebounds as Oakton defeated Centreville 65-48 on Jan. 18 at Oakton High School. The defending state champion Cougars improved to 14-2 overall and moved into sole possession of first place in the Concorde District with a 4-0 mark.

The Wildcats had no answer for the physically imposing Manner, who burned Centreville in the paint, from the perimeter and at the free-throw line. At the other end of the floor, head coach Tom Watson said the Wildcats weren’t their usual attacking selves.

“I think we came out scared in the first half,” he said. “I think we were awful. I think we didn’t bring our game. We were afraid to penetrate—that’s not our game. I think that big girl from Oakton intimidated [our players].”

Manner scored 16 points in the paint, made one jumper, knocked down one 3-pointer and went 16-for-19 at the free-throw line.

“We don’t have bunches of plays for her,” Oakton head coach Fred Priester said. “We’re an equal-opportunity offense. But when things break down, the kids have great trust in her and great faith in her. She’s a big girl, but she’s extremely agile and she moves around that basket very well. . . . She has worked as hard and has come as far as, really, any kid I’ve ever coached.”

“We don’t have bunches of plays for [Elizabeth Manner]. We’re an equal-opportunity offense. But when things break down, the kids have great trust in her and great faith in her. She’s a big girl, but she’s extremely agile and she moves around that basket very well. . . . She has worked as hard and has come as far as, really, any kid I’ve ever coached.”

OAKTON LED BY 12 at halftime, but Centreville pulled to within five on three occasions late in the third quarter and trailed 43-36 entering the fourth. Manner extended the Oakton lead with a pair of buckets in the opening minute and finished with 15 points in the final quarter. She made seven of eight free-throw attempts during the final four minutes, 25 seconds.

Oakton led 17-8 at the end of the first quarter. Manner scored 11 points in the opening period, making nine of 10 free-throw attempts.

Priester said Manner has come a long way at the foul line since her freshman season. According to stats from the Washington Post’s website, Manner shot 76 percent from the line through this season’s first 16 games.

Manner said improvement at the line was about building confidence.

“We work on our shot every day in practice,” Manner said, “so I started to get more comfortable with it and then I just stopped thinking about it and just shot the ball like we do in practice every day.” 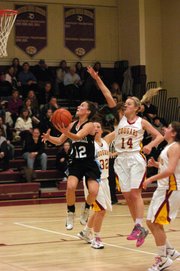 While Watson praised Manner, the Centreville coach wasn’t pleased the Oakton center was not whistled for a foul during the game.

“She’s great. She’s a good player. She’s another [Washington Mystics guard and former Oakton star] Jasmine [Thomas]—she gets every call in the world,” Watson said. “It doesn’t matter what you do, she gets a call. That’s irritating for a coach. That’s why I was barking. It just gets old. She had 16 free throws and she had zero fouls. How could she not have a single foul in there? You don’t think we drove on her and bumped her the same way she bumped us?”

“I think Lindsey played phenomenal tonight,” Manner said. “She has a good sense of where people are open and she has a good calmness about her where she can take what Priester tells her and put it into action.”

After scoring 15 points in the first half, Centerville tallied 21 in the third quarter to make things interesting. Sophomore guard Caroline Wakefield buried a 3-pointer to cut the Oakton lead to 37-32 with 1:37 remaining in the quarter. Senior forward Tori Collar scored her 10th point of the quarter to make the score 39-34 and junior guard Jenna Green’s bucket cut the Oakton lead to 41-36, but the Wildcats got no closer than five.

“I think we came out scared in the first half. I think we were awful. I think we didn’t bring our game. We were afraid to penetrate --- that’s not our game. I think that big girl from Oakton intimidated [our players].”

“I don’t think we really came to play today, especially me,” said Green, who was born in 1996, one year after Centreville last beat Oakton. “My shot was off. We weren’t playing our usual game. I don’t know if it was because we were intimidated; I don’t know what it was. I definitely think that we can beat them and I can’t wait to play them again.”

Centreville defeated Chantilly 48-28 on Tuesday, improving the Wildcats' record to 15-2 overall and 4-1 in the district. Centreville will host Robinson at 5:45 p.m. on Friday, Jan. 25.

The second meeting between Oakton and Centreville will be Feb. 5 at Centreville High School.