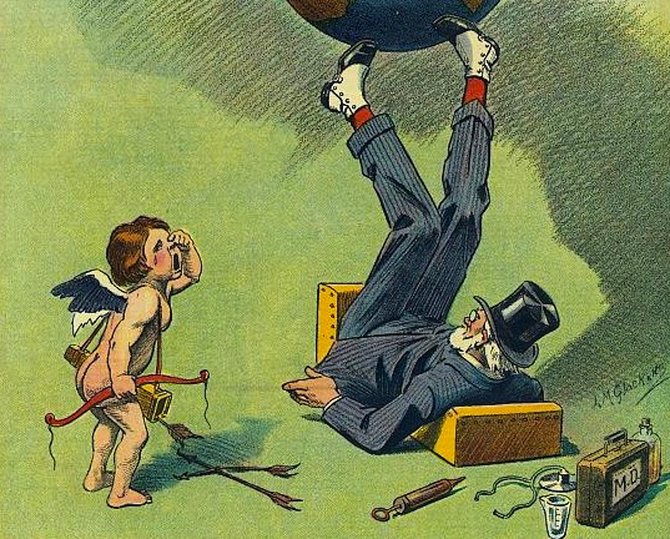 This 1913 cover of Puck Magazine features a well-dressed man balancing the earth with his legs. A cherub weeps over the headline, 'Eugenics Makes the World go ’round.' Courtesy of the Library of Congress 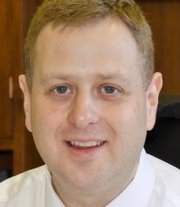 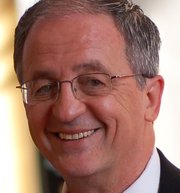 Nobody knows how many people are survivors of Virginia’s forced sterilization program, which targeted people with mental illness, mental retardation or epilepsy. But a bipartisan effort now under consideration in Richmond would hand each and every one of then a $50,000 check from the people of Virginia. According to one calculation, that could mean as much as $73 million.

“I would ask that we not run away from this issue,” said Arlington Del. Patrick Hope (D-47) “Instead of taking the lead in an area that we are regretful for, let’s be a state that takes the lead to right a wrong.”

The effort has created an unlikely alliance — Hope has joined forced with conservative Del. Bob Marshall (R-13), who has introduced House Bill 1529. If approved by the General Assembly and signed by the governor, the bill would provide compensation to persons involuntarily sterilized by the commonwealth of Virginia between 1924 and 1979. A research project conducted by the University of Vermont estimated the number of individuals sterilized in Virginia at 7,325.

“Virginia provided the model for the Nazi sterilization program,” said Marshall during a recent floor speech about the bill. “We provided the fulcrum for what became the Final Solution because we devalued life so much we thought these people were trash.”

THE HISTORY OF EUGENICS in Virginia dates back to the early 20th century. Although states such as Indiana and Connecticut were the first states to adopt legislation, Virginia’s law was based on a model created by the Eugenics Record Office in New York. After the General Assembly adopted the law in 1924, eugenicist Harry Laughlin worked with other states to adopt similar legislation.

“The worry was that Laughlin and other proponents of eugenics thought the individual state laws getting based on their ideas were going to be easily overturned,” said Andrew Light, assistant director of George Mason University Center for Philosophy and Public Policy. “They were potentially unconstitutional. And so Virginia was one of the first states to create a law based on the model.”

The law applied to interracial couples and those labeled “feebleminded, insane, idiotic, imbecile or epileptic.” And it didn’t take long to create a legal challenge. The first documented case of forced sterilization was Carrie Buck, a Charlottesville teenager who became pregnant after being raped. Her family committed her to the Virginia State Colony for Epileptics and Feebleminded, where she was sterilized against her will. A legal challenge to that sterilization went to the U.S. Supreme Court, which upheld Virginia’s law in a case known as Buck versus Bell in 1927.

“We have seen more than once that the public welfare may call upon the best citizens for their lives,” Justice Oliver Wendell Holmes wrote in the majority opinion. “The principle that sustains compulsory vaccination is broad enough to cover cutting the Fallopian tubes.”

THAT DECISION opened the door to five decades of forced sterilization. Although the theory behind the law was the creation of a better society, that’s not how it was used in Virginia. In practice, the law was used to target a variety of shortcomings, including alcohol, syphilis and criminal behavior. The program ended in 1979, when the General Assembly removed the language from the state code. Even then, the program was alive and well.

Now, 85 years after the Supreme Court case, Hope and Marshall says it’s time to find out who the surviving victims are and learn their stories. During a recent session of the House of Delegates, Marshall read from the 1924 law that described “defective persons” who would become a “menace to society” if allowed to procreate.

“I’m not reading some religious tract or eugenics tract,” Marshall told his colleagues. “This is the code of Virginia, decided in this building in this room by our predecessors in the General Assembly.”

THE BILL HAS BEEN referred to the Committee on Appropriations, where it was sent to a subcommittee on Health and Human Services. Supporters say the bipartisan team of Hope and Marshall could provide a powerful force, especially if they leverage the personal stories of survivors as was the case during a press conference earlier this month. Despite the economic cost of handing out compensation, political support for the bill could come from several directions.

“One of the great proponents of the eugenics movement was one Margaret Sanger, who was also the founder of the modern-day Planned Parenthood,” said Todd Gilbert (R-15). “So I thank the gentleman from Arlington for his recognition of the horrors that occur when we as a society and a culture begin to devalue human life.”