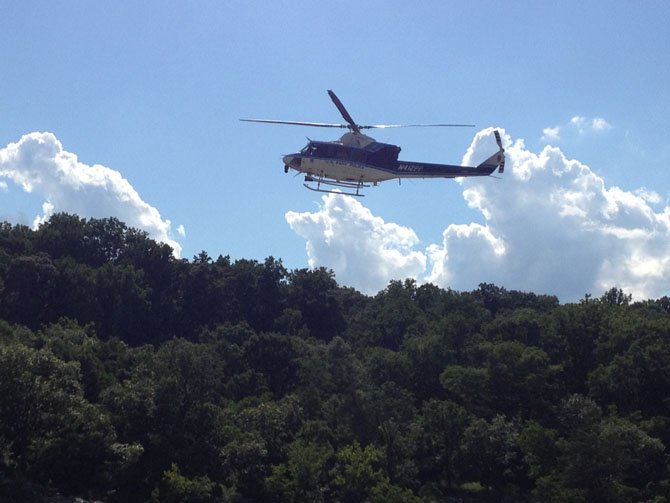 A helicopter flies low through Potomac River gorge searching for a swimmer who didn't make it back to shore. Photo by Mary Kimm.

Potomac — In less than one week, two people have drowned in the Potomac River.

On Saturday, a 21-year-old drowned near Bear Island. Three of his friends attempted to save him, but were unsuccessful.

Following an extended joint operation, Montgomery County Fire & Rescue recovered the victim’s body in the water at approximately 2:25 p.m. on Monday, July 1. Montgomery County Police search and rescue officers were on scene during these recovery efforts.

Montgomery County Police detectives investigating the victim’s death revealed that the victim was diving off the cliffs on the Virginia side of the river when his friends noticed him go under the water and not surface. His friends called 911.

The victim has been identified as Vincent Crapps of the 3d United States Infantry Regiment (The Old Guard), stationed at Fort Myer, Va.

In both cases, extensive rescue searches were conducted by land, water and by air.

Historically, this time of year causes the greatest concern to park officials, since river levels are high, summer temperatures soar, and large numbers of visitors flock to the river.

"I have seen people unknowing of these river dangers, enter the river for a swim or simply fall directly into the river's deep waters and never return," said Brent O'Neill, park manager at Great Falls Park since 1997, who has seen many fatalities and hair-raising rescues along the river.

"Don't let this happen to you or someone you love," he said.

One month ago, on May 22, Montgomery County Fire and Rescue, Fairfax Fire and Rescue, National Park Police from the Chesapeake and Ohio Canal National Historical Park at Great Falls, and the Potomac Paddlers Volunteer Corps, warned the public about the dangers of the river.

"The Potomac often looks calm on the surface. What is not visible are downward moving currents that can pull a human being or dog down to the bottom," according to safety materials from the National Park Service.

One speaker last month was a young adult who jumped into the river, attempting to cool off on a hot day. He was rescued by fire and rescue swift water rescue teams. "We kind of got caught. I got caught in the middle. The water is not peaceful, it is lethal," said the young adult.

As the temperatures rise and visitors flock to the park, the coolness of the water tempts people, said Moe Witt of Montgomery County Fire and Rescue Services. "It is a beautiful scene next to the water and inviting, especially when it gets hot," he said.

"So they want to get in and cool off and think, 'This doesn't look so bad,' and it gets deadly," said Witt.

"You can get sucked underneath and pinned underneath real quickly," Lowe said. "Once you get down there, the force of the water and the current of the water will hold you and just stick you against the rocks. There's no getting out from that point."

Swimming, wading, and entering the river in any manner are prohibited year round. Dangerous currents, rocks, and rapids make the river extremely hazardous. Rescues from the river itself are difficult. People need to keep their distance from cliff edges and use caution while hiking in rocky areas.

All swimming in the river is illegal, said Assistant Chief Scott Graham, spokesperson for Montgomery County Fire and Rescue Services.

"The scenery and river environment is breathtaking and inspiring. But often, where there is rugged natural beauty, danger is present as well. The Potomac River is deep, fast moving, with jagged rock bottoms making power currents that even strong swimmers can not swim against," said O'Neill.

"Respect the river, respect its power," he said.