Streetcars on Track in Arlington, Despite Massive Pushback
Votes

Streetcars on Track in Arlington, Despite Massive Pushback 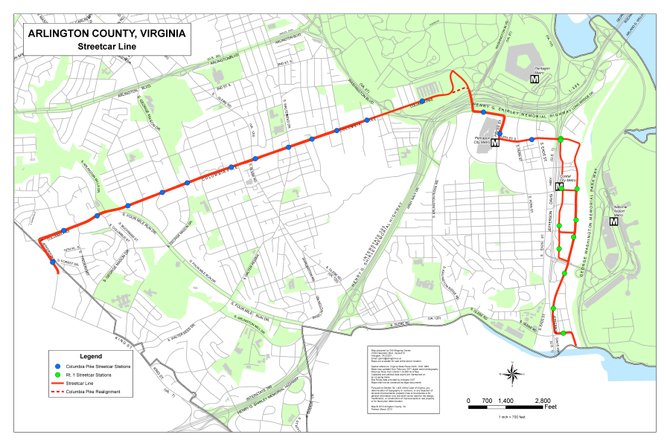 This map show how the Columbia Pike streetcar will extend into Fairfax County along Jefferson Street.

A majority of Arlington County Board members describe the new agreement with Fairfax County as a routine matter, just another step in an ongoing process that's already been approved and is moving forward at full speed ahead. But for opponents of the streetcar system, one of whom was elected to the County Board on a platform of opposing the project, the board's discussion of a new agreement with Fairfax County about the management of the design phase was yet another opportunity to question the project.

"We can re-argue the issue every time this comes up if people want to," said Chris Zimmerman at one point in the discussion last week. "This is essentially a routine matter carrying out a policy that's already been established."

Opponents of the streetcar system show no signs of backing down, especially now that the federal government has denied funds for the project and rejected the county's cost estimates for the project. Newly elected County Board member Libby Garvey used the opportunity to raise new questions about the project and once again call for a cost-benefit analysis of the streetcar project before moving forward. At one point, when Garvey turned to senior county officials to ask a question, it was clear that Board Chairman Walter Tejada's patience was wearing thin.

"If you could make it quick, please," the chairman directed.

THE PUBLIC DEBATE about the streetcar system has become increasingly pointed in recent months, and opposing sides disagree on basic facts. For example, the federal government estimates the project is most likely to come in at $310 million, and it could be as much as $410 million. But county officials are sticking by their original estimate, which is $249 million. That means supporters and opponents are divided over something as basic as the cost of the project in question.

"It is fiscally irresponsible in view of the county's financial picture," said Audrey Clement, the Green Party candidate against incumbent Democrat Jay Fisette.

Supporters say the money from the federal government was only expected to be about $60 million, a fraction of what they consider to be a $249 million project. Meanwhile, many of the county's land-use decisions have been made with the expectation that a streetcar system will be operational in the near future. So going back on the promise now would be ill-advised, and potentially financially harmful to the county's financial situation. Many supporters view opponents as people who have not been involved in the process until recently and who are trying to derail a system that could transform a traffic-clogged road into a thriving urban corridor.

"Opposition to the streetcar is both unfair and mean-spirited," Diane Dustin, lived near Columbia Pike since 1986. "While the million-dollar bus stop on Columbia Pike became a laugh line among anti-streetcar people, they didn't mention a word about the $1.5 million dog park in Clarendon as a waste of money."

"Just saying that a cost-benefit analysis hasn't been done doesn't make it true," said Zimmerman. "I suspect if we did another one and they didn't like the result they'd still be saying we hadn't done one."

Opponents cry foul. They say the study supporters point to as a cost-benefit analysis is actually a return-on-investment study that was conducted as part of the failed bid for federal money. They say the county has never produced a side-by-side analysis showing economic development benefits of a bus-rapid transit system or an articulated bus system compared to a streetcar line. Now that county officials are putting together a new funding plan for the system, opponents say, the time is right to compare the two systems to Arlington residents have a more complete picture.

"This project feels so un-Arlington in its approach," said Garvey. "On this one issue we don't seem to want much information."

THE ORIGINAL AGREEMENT between Arlington and Fairfax dates back to the summer of 2009, when the two neighboring jurisdictions established a structure for managing the environmental planning and design services. The new agreement establishes processes for managing the next phase of environmental planning and conceptual design, designating Arlington County as the project sponsor and lead partner. That means Arlington will be responsible for 80 percent of the consultant service contracts and Fairfax will be responsible for 20 percent.

"We should not be paying a majority of the tab when our partner gets a majority of the benefits," said John Antonelli, an opponent of the streetcar system. "Fairness dictates Fairfax pay its fair share if we are going to have a trolley and that's not 20 percent."

Now that the project agreement has been approved on a four-to-one vote, Arlington will be awarding a task order contract for environmental planning and conceptual design services worth $1 million. Arlington County officials will invoice Fairfax County quarterly for its share of that budget, as long as the amount does not exceed $195,830.

"This is really important work," said County Board member Mary Hynes."This work is meant to settle some of the uncertainty that led the FTA to ask questions about how much things were going to cost."