HAHNE, a McLean resident since 1972, has been an active volunteer in McLean Little League and Babe Ruth League, the Langley High School Boosters and the Lutheran Redeemer Church. 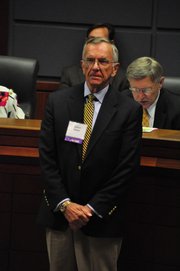 McLean resident Bob Hahne is awarded Lord Fairfax for the Dranesville District Tuesday, June 4. Wendy Gradison of Psychiatric Rehabilitation Services was also recognized by Foust, but was unable to attend the ceremony.

For the past 15 years, he has been a member of the McLean Rotary Club, where he learned about a program called Stop Hunger Now, where volunteers package nonperishable meals for hungry people around the world.

"My wife and I attended a Rotary district conference, where we saw the process of how the meals were packaged," Hahne said. "As we were driving home, we talked about how easy it looked, and what a difference it made, and made a promise that we would bring it back to McLean, and that we would package 100 meals."

Hahne’s wife Barbara passed away in September 2011, and he said he promised her on her last day that he would complete the one million meal pledge.

"With the help of many churches, schools, Rotary Clubs, the American Legion Post 270 and hundreds of individuals, the McLean Stop Hunger Now events have packaged and shipped more than 700,000 meals around the world," Foust said.

Hahne said he plans to hit the million meal mark with an event this November.

"We’ve had an unbelievable response from this community over the past few years, in terms of volunteer time and financial contributions," he said. "Hopefully that can continue, because this is a service that makes a huge difference in so many lives."

The next Stop Hunger Now event will take place Saturday, Nov. 2 at the Lutheran Redeemer Church. Hahne is still looking for volunteers (his goal is 1,100 people) and money for the meals, which cost 25 cents each, meaning donations totaling $75,000.

GRADISON has served as president and CEO of Psychiatric Rehabilitation Services since 1998, after being promoted from director of the PRS Reston Center.

"One in five people in the United States lives with some form of mental illness, but stigma and prejudice is the greatest barrier to recovery. People just don’t feel comfortable talking about it," she said. "What happens then is people who need help, tend not to be able to get it. What we want people to know is that PRS can help you with all aspects of your life."

In 2011, the PRS board of directors expanded the populations they serve to people with emotional and behavioral disorders, regardless of diagnosis of mental illness.