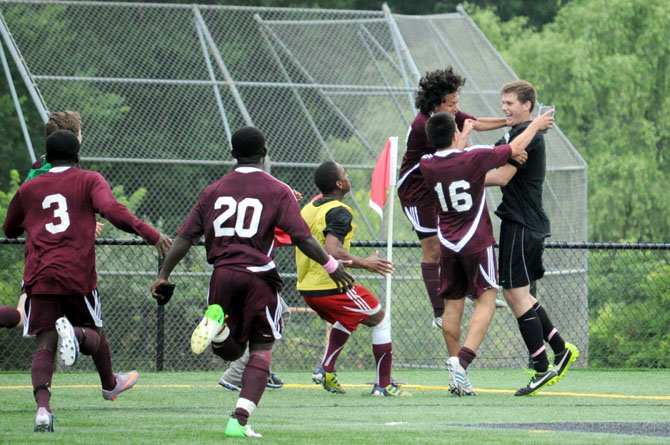 Teammates celebrate with Lucas Belanger, right, after the Mount Vernon goalkeeper made the game winning save in a penalty-kick shootout against Cosby in the state championship game on June 9 at Westfield High School. Photo by Craig Sterbutzel.

The Mount Vernon boys’ soccer team had overcome a 3-7-1 start to the season and won a pair of postseason penalty-kick shootouts to reach the state championship match. But when Rahim Costa-Dorsey, a Division I-bound goal-scoring force, had his attempt thwarted by Cosby goalkeeper J.C. Fuller during sudden-death PKs on the most pressure-packed of prep soccer stages, the Majors were one successful Titan PK from ending their resurgent run to the state final in agony.

But thanks to a pair of clutch saves by senior goalkeeper Lucas Belanger, any sense of impending doom for the Majors gave way to euphoric celebration.

Belanger saved the ensuing Cosby PK to keep the Majors alive. After each team converted its next attempt, Mount Vernon senior Erik Rodriguez put the ball in the net, placing the pressure back on Cosby. With the Titans needing a successful PK to continue the shootout, Belanger made another save, ending the match and giving the Majors the 2013 AAA state championship with a 0-0 (6-5) victory at Westfield High School.

After Belanger’s game-winning save, the Majors rushed to the corner of the field in celebration of winning the school’s first team state championship since the football program brought home a title in the fall of 1983.

“I have no words for this,” Rodriguez said. “It just feels awesome.”

Mount Vernon and Cosby were scoreless at the end of regulation and neither team scored during four five-minute overtime periods, resulting in a penalty-kick shootout. After five rounds, the teams were tied at 4-all, resulting in sudden-death PKs.

“I’m actually in shock that we did it. I’m shocked that we put it all together. We came in with eight losses — the most losses a state tournament team had — and we prevailed and went all the way through, so it was great.”

Costa-Dorsey, who made his first PK attempt, came up empty on his second try when the ball deflected off Fuller and hit the right post. Costa-Dorsey appeared devastated after his attempt came up empty, but as it turned out, the VCU-bound forward had nothing to worry about.

“I was just so scared,” Costa-Dorsey said. “I couldn’t believe that I missed that PK, but I think the goalkeeper made a great save. But then Lucas on the other side, he had my back. He saved me.”

After Fuller’s save, the Majors needed a Cosby miss to keep their season alive.

Belanger gave his team a chance.

“I took my time going back to the line on the kick to see what they’re doing,” Belanger said. “When he was putting the ball down, I had a general idea of where he was going to go. I wasn’t completely sure, but then once he was running up to the ball, I was positive and I just wanted to [reach] as far as possible.”

Kargbo made a pair of PKs for Mount Vernon, and Daniel Obour made one.

“I’m actually in shock that we did it,” first-year Mount Vernon head coach Tony Garza said. “I’m shocked that we put it all together. We came in with eight losses — the most losses a state tournament team had — and we prevailed and went all the way through, so it was great.”

Aided by the return of Costa-Dorsey and Belanger, who each rejoined the Majors late in the regular season after playing academy soccer, Mount Vernon overcame a 3-7-1 start to win 11 of its final 12 games. The Majors’ only loss in the final month was a 3-1 defeat against Oakton on May 31 in the Northern Region championship game.

Garza, the former head coach of the Mount Vernon girls’ soccer team, took over as head coach of the boys’ team after his twin brother, Robert Garza, left after the 2012 season to take the head job at Robinson. Prior to leaving, Robert Garza led the Majors to the region quarterfinals in three consecutive seasons. In 2012, Mount Vernon won the National District championship and finished 14-2-2, ending its season with a penalty-kick shootout loss to Robinson.

This season, the Tony Garza-led Majors stumbled out of the gate, starting 0-3-1.

“When we first started the season, our first thing was, hey, we’re going to win everything again and just pick up where they left off last year,” Tony Garza said, “and after the first couple games we could see that we had a lot of work to do. The boys weren’t clicking. It was where every single person, instead of working as a team, it was more individual work on the field instead.

Mount Vernon’s Aldaid Rodriguez controls the ball against Cosby during the state championship game on June 9 at Westfield High School.

“… The season, I think we started off thinking that we were going to pick up where we left off last year, what my brother built, but we realized it was harder than we thought it was.”

Garza said the turning point of the season was a 2-1 loss to Hayfield during the regular season on May 2. Belanger and Costa-Dorsey had returned and the Majors played well, but failed to get the win. From there, Mount Vernon won 11 of its final 12, including a 6-1 victory against Hayfield on May 17 in the National District championship game.

The Majors beat Fairfax and T.C. Williams in the regional tournament before knocking off Woodson in the semifinals to earn a state berth.

After losing to Oakton in the region final, Mount Vernon beat Forest Park in the state quarterfinals, defeated Midlothian in the semifinals and beat Cosby in the championship match.

“The biggest thing, though, is for the boys and the community,” Tony Garza said. “When we go to away games to schools out west — no disrespect to any of the schools out west — but a lot of boys, they hear stuff [from people] — you’re Route 1 trash, you’re poor. Some of the boys, they block it out. The Route 1 corridor, the community of Route 1 and Mount Vernon needed this win. We needed that [winning feeling].”