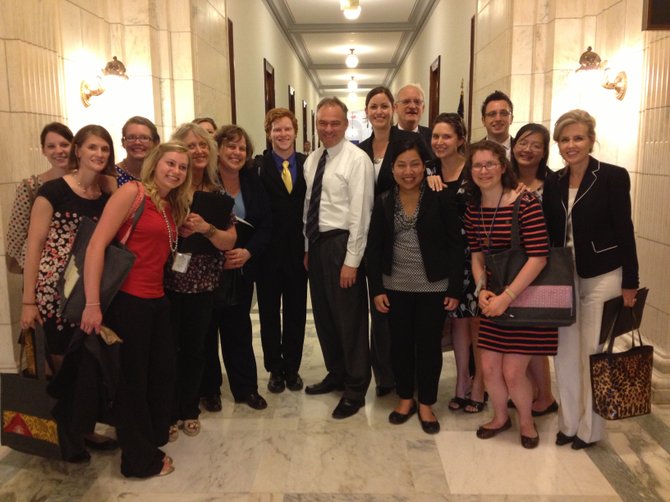 Participants—pictured with Sen. Kaine—met with more than 210 congressional offices to build support for strong U.S. policies to combat trafficking and slavery at home and abroad. Photo contributed

Fairfax County resident, Dawn Turton—who lives in Springfield, works in McLean, and goes to church in Alexandria—returned home late Tuesday evening, June 11, from Washington D.C. after visiting the offices of congressman Moran, Senator Warner and Senator Kaine. Turton was among 250 individuals from 40 states who took part in a day of advocacy organized by human rights agency International Justice Mission (IJM). Participants met with more than 210 congressional offices to build support for strong U.S. policies to combat trafficking and slavery at home and abroad.

Turton and fellow advocates from Virginia advocated for elevating the authority of the State Department’s Trafficking in Persons Office (TIP)—a U.S. government agency dedicated to combating human trafficking. U.S. citizens’ interest in eradicating slavery has kept the issue high on the political agenda in Washington for the past decade. In recent years, the existence of proven anti-slavery models has equipped advocates with data and success stories to encourage members of Congress and senators from across the political spectrum to increase investment in anti-trafficking programs.

“When people hear the phrase ‘human trafficking,’ it sounds like something that happens in a place far away from where we live. But it’s happening here in the U.S. too!” said Turton, “The good news is that it is possible to combat human trafficking, which is why it’s important to advocate for strong policies and funding with our elected leaders in government.”

All government agencies have faced budget cuts in the face of sequestration, making citizen support for US government programs to combat slavery more important than ever. “When it comes to fighting human trafficking, a relatively small amount of money goes an extremely long way,” said Holly Burkhalter, vice president of government relations at IJM. “The State Department’s Trafficking in Persons Office makes grants that save lives and build international capacity to end human trafficking. The office should be made a full-fledged State Department Bureau, in order to best represent the interests of the most vulnerable people in the world—slaves and trafficking victims.

Organizations like IJM are seeing significant improvements in public justice systems protecting the poor and preventing slavery, even over short periods of time. In just four years of collaboration with local authorities in Cebu, Philippines, IJM has seen the number of minors available in the commercial sex trade reduced by 79 percent. Private investment by Google.org for IJM’s anti-slavery work in India has enabled a dramatic expansion of the organization’s work there from nine to 50 states in the country, resulting in the freeing of nearly 1,000 bonded labors in just 10 months.

“It’s been encouraging to see the progress over the last decade on this issue, however, there is still much to be done,” said Turton, “this includes urgent, transformative work that is worthy of U.S. Government investment.”

IJM lawyers, investigators and aftercare professionals secure justice for victims of slavery, sexual exploitation and other forms of violent oppression. In the past year alone, IJM has brought rescue to more than 2,400 victims of violence and injustice. For more information about IJM and how you can be part of the solution, visit www.ijm.org.