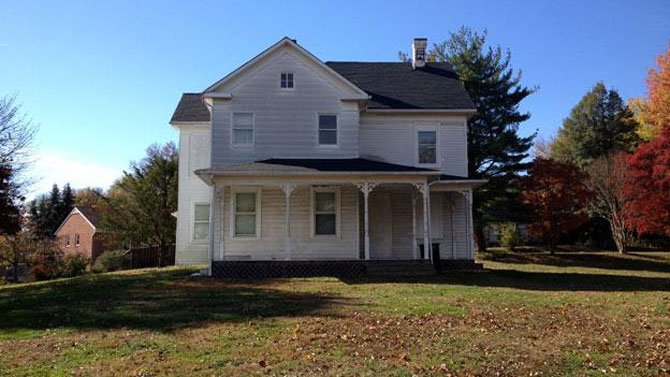 Judy Norton reaches into a patch of sprawling oregano at Reevesland to pull off the top of a plant about to bloom. Searching across the thick green mound, she finds another. Then another. She's trying to keep the plant healthy by preventing it from blooming. Neighborhood residents here say that the house at the top of the hill has also been prevented from blooming, but the result is not as pleasing as the oregano plant in the old vegetable garden once tended to by Nelson Reeves.

"I feel like the county has forgotten us," said Norton, a Bluemont resident, as she continued to work in the garden. "If they were really interested in taking care of the house, they would have taken some action by now."

But now that the county has owned the property for a decade, the urban agriculture task force has finally presented the county board with a recommendation to transform the house into a learning center. Neighborhood resident Joan Horwitt has been pressing county officials to create a learning center at Reevesland for years, and she's created a nonprofit organization to run the operation. Now that the task force has approved an official recommendation, she believes that her years of laboring in the field will finally bear fruit.

TUCKED AWAY in a quiet section of the Bluemont neighborhood on the western edge of the county, Reevesland was the last remaining dairy farm in Arlington County. When it was purchased by William Torreyson in 1866, the 160-acre farm stretched west of Four Mile Run and south of Wilson Boulevard, extending beyond Route 50 to Glen Carlyn Road. It was later operated by Torreyson’s daughter, Lucy, and her husband, George Reeves, from 1898-1949.

Their son, Nelson Reeves, became a partner on the farm in 1924, the third generation of family to work that land. He and his wife, Louise Reeves, kept the farm running until July 1955, when it released its last shipment of milk. Well into the 1990s, Nelson Reeves was well-known for his beets — which are remembered as being the size of a child’s head. And then there was his distinctive way of introducing himself to people on the street in the Boulevard Manor neighborhood

After Reeves died, the county government acquired the property in 2001. One reason for the purchase was to prevent the expansive greenspace from being developed into a new subdivision. County officials say that the preservation of the house and property has been a success in its own right, preventing a developer from demolishing the historic structure and subdividing the land.

“They could have sold this piece of property to some developers, and we would have McMansions in our backyard,” said Judy Massabny, a neighbor. “Mister Reeves wanted the property to stay intact and always be a reminder that there was a dairy farm here.”

A DECADE came and went, yet nothing happened at Reevesland. Until now. Last week, the Urban Agriculture Task Force issued a report with a series of recommendations about everything from community gardens to municipal composting. One of the top nine recommendations was to ensure urban agriculture education with an adaptive reuse or repurposing of the Reevesland historic farmhouse. Recommendation B.1.4 suggests that the county transform the property into a learning center.

"Coordinate with non-profit organizations seeking to provide learning opportunities and demonstration sites for best practices in food production," the report concludes. "An example is the proposal, currently in a “Request for Information” process with the county, to enable the county-owned historic Reevesland farmhouse in Bluemont Park to be rehabilitated and re-opened as a non-profit learning center with community-school collaboration."

Part of that goal has already materialized. Last week, a group of third graders from nearby Ashlawn Elementary School arrived at the school on a warm June afternoon recently to conduct the third and final harvest of lettuce this year. The children were harvesting the lettuce to donate to the Arlington Food Assistance Center, a charity that gives nutrition to people in need.

"It was fun to, like, come out here and not have to go to the store to get it," said third grader Grace Gent. "One it's a waste of time and two it's boring to sit in the car a while."

In the coming months, members of the Arlington County Board will formally consider the recommendation to transform the old farmhouse into a learning center, which could cost as much as $1.3 million.