This honor is awarded every year by Langley crew to honor the memory of Hillary Fein, Langley Class of 1999. Fein was a dedicated member of the Langley crew team who died in 2000. 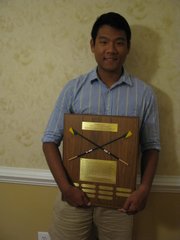 Words engraved on the plaque from a diary entry made by Hillary in 1996 after the Stotesbury Regatta in Philadelphia read in part, “Today … we realized what ‘team’ means … honor, heart and honesty about pulling your best and never giving up. I am dedicated to this sport forever. You don’t win a race on the water, you win a race in your heart.”

In addition to the Fein Spirit Award, Cheng earned several other awards and honors. Among his academic accomplishments, he is a National Merit Scholarship finalist and also received a Scholar Athlete award. He was a finalist in numerous science competitions, including the Science Olympiad (state champions 2012, national qualifier 2012, second in state 2013) and the Science Bowl (second in state 2013).

Ryan was part of the Langley Men’s Varsity four-seat that finished second in the VA state championships and went on to place ninth at nationals.

He will attend UVA in the fall and plans to row at the school.

And junior Stephanie Dubois received an honorable mention for the Washington Post “All-Met” team for rowing.