Defense figures to be Saxons’ strength in 2013. 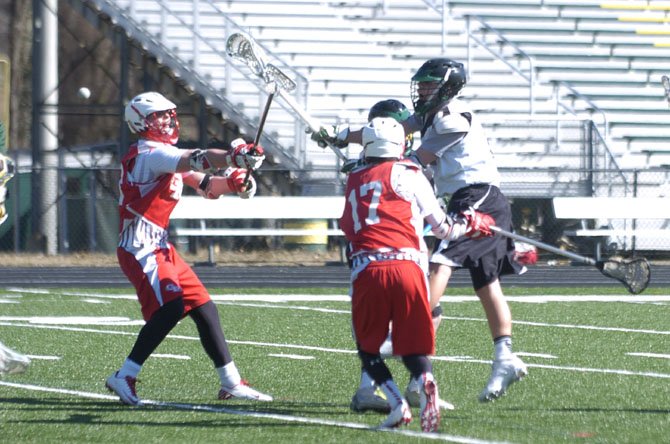 McLean — Earl Brewer, who enters his 19th season as head coach of the Langley boys’ lacrosse program, has led the Saxons to four consecutive state championships.

Brewer, whose Saxons have also captured two region crowns and nine district titles under his guidance, prefers a positive approach to coaching and likes to keep in perspective that real pressure is faced by parents paying a mortgage rather than students playing a game. That being said, Brewer knows anything short of a fifth straight state title would result in some unhappy campers.

The Langley boys’ lacrosse team will open its season Friday at home against Dominion.

“I don’t think it puts more pressure (on the team), it just makes us want to continue that legacy,” he said. “It gets the young kids going, gives them something to work toward.”

Byrne, at 6-foot-3, and Dotson, who stands 6-foot-6, are part of a physical Saxon defense which figures to be the strength of the team. Dotson was selected first-team All-Liberty District and first-team All-Northern Region last season and will play lacrosse at Bucknell University. Senior Tyler Kovacs (6-3) and junior Hunter Yates (6-0) will also be contributors as defensemen. Senior Clay Kennedy is the Saxons’ goalkeeper.

“My defense is very big,” Brewer said. “… They look like a college team when you see them on the field. And they’re talented too—they’re not just big lummoxes. They can run, they can dodge and shoot, themselves. They play great one-on-one [and] they’re all smart.”

“I think the expectations are going to be if we don’t win a state championship, people are going to be disappointed—the fan base, the student body, the players themselves.”

Salzer, a midfielder, had 25 goals and 46 assists last season. He will play collegiately at the University of Delaware.

“He’s got the whole package,” Brewer said. “We call him an old-school middie because he can play middie, he can play defense and offense, he runs the field [and] he’s a tough guy, too.”

Junior attackman J.T. Meyer returns for his third season on the varsity and is one of the Saxons’ top offensive threats. However, Meyer suffered a knee injury prior to the season and could miss some time. Junior Billy Orme, seniors Nick Guglielmo and Patrick Kearney, and sophomore Weston Simonides will also look to contribute.

Langley opens the season with a home game at 6 p.m. on Friday, March 15, against Dominion—the Saxons’ first test in their quest for a fifth consecutive state championship.

“We’re out here having fun and all,” Dotson said, “but at the end of the day, we’re here to get business done.”