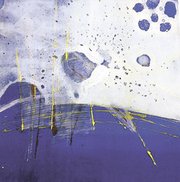 Gallery Har Shalom has opened its exhibit “Adding In, Taking Away” — a showcase of talent by five area artists. Now through April 22, the gallery presents sculpture, woodworking and artwork created with a variety of printmaking techniques. The featured artists are Pauline Jakobsberg of Potomac; Charles Edwin Myers, Bethesda; Allan Akman, Rockville; William Peirce, Silver Spring, and Patricia Affens, Olney. Gallery Committee chair Fran Abrams explains the theme of the exhibit: “Each of the processes used by these artists requires that they add in — ink, oil, stone, wood — or take it away.”

Artist Pauline Jakobsberg is one of the founding members of Har Shalom — and also a founder of the Washington Printmaking Gallery. She has been a printmaker for 35 years. Her mixed-media collagraphs present stories and memories that she wants to preserve.

“Each piece tells a story; people love to hear the stories that inspire me. From these stories, I recreate the complexity of the past,” she said. “Many of my pieces are influenced by my husband’s family who were Holocaust survivors who escaped to Bolivia.”

She utilizes handmade papers, inks and printmaking methods to produce her hand-pulled prints. The body of her work in this exhibit is referred to as “Family Legacy.” A lighter, more fanciful Jakobsberg can be seen through her “Dresses” prints. She grew up in New York City in the heart of the Garment District where her father was a Garment Center salesman — and now she recreates the “sample dresses” that he brought home to her. Jakobsberg’s art has been displayed in galleries and museums around the world — most recently in Shanghai.

“Each of the sculptures in this show depicts Biblical characters, objects and scenes,” he said. “I take dramatic license with the Biblical narrative, but connect each object to a scriptural quotation.” Myers, a scientist who worked for the National Science Foundation, became interested in sculpting through art classes at Montgomery College.

“It may take me 2-3 months to complete a sculpture. I chip away at a block of stone, or, with plaster, I start with a metal framework and mold around it. I need to spend time thinking about what I want to create. Often I make a small-scale model,” he said. Some of his pieces on display are “Lot’s Wife,” “Twisted Sisters” “Young David” and “Burning Bush.”

Har Shalom member Allan Akman’s screenprints will also be featured in the exhibit. The Rockville resident has been working in screenprinting since 2009 when he decided to use a photograph of his in-laws in an American Gothic-like scene as the basis for a screenprint. Akman continues to work from photographs, developing images which are transformed into multiple layers of color screenprinted manually one color at a time. “I have learned to adjust my dreams to the reality of the squeegee each day,” he said.

Wood vessels by William Peirce of Silver Spring will bring another dimension to the show. These vessels are made with a band saw, not turned on a lathe. The vessels are made from a single board created by gluing several pieces of wood together, then cut into rings, stacked, glued and finished.

Peirce exhibits in shows by the Washington Woodworkers Guild, the Creative Crafts Council, and the Senior Artists Alliance as well as at the Sugarloaf Mountain craft fairs. Additionally, his work is in Partners Gallery in Bethesda, Peirce Mill in Rock Creek Park in Washington D.C. and in the Strathmore Mansion in Rockville.

Patricia Affens of Olney will display her abstract paintings and monotype prints. The former information technology specialist now feels that “each blank canvas or piece of paper begins an exploration.” Her work has been exhibited locally at the Strathmore Mansion, Glen Echo and Gallery B in Bethesda.

Gallery Har Shalom is located at Congregation Har Shalom, 11510 Falls Road, Potomac. The exhibit is free and open to the public. Call 301-299-7087 for hours and directions.