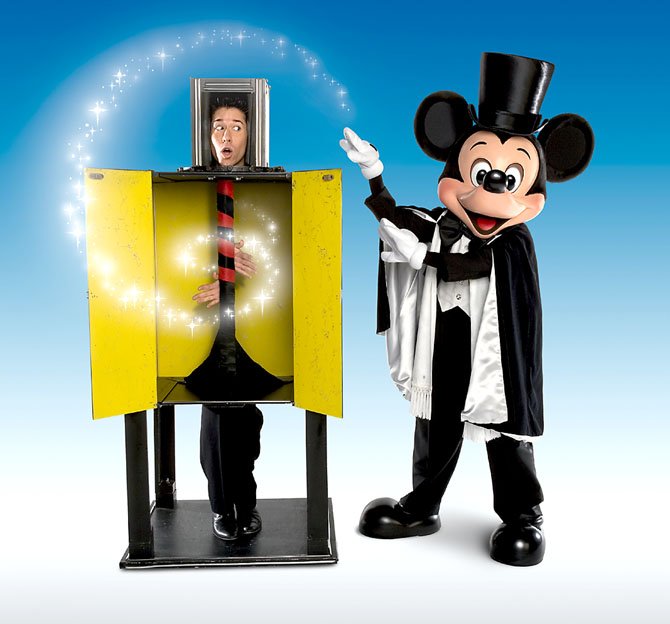 Brad Ross just finished his sixth year as the master illusionist in the world tour of Disney Live! presents Mickey's Magic Show, and he'll be bringing his magic to Magi-Whirl 2013 at Bishop Ireton High School on April 6. Photo Contributed

Eric Henning, fresh off his third Presidential Inaugural appearance, will be Master of Ceremonies at Magi-Whirl 2013 at Bishop Ireton High School on April 6.

An annual magic convention will bring big stars of the entertainment world to a high school auditorium early next month, and everyone's invited.

Magi-Whirl is one of the Washington, D.C.-area's premiere magic conferences, bringing together hobbyists with professionals and collectors alike to share ideas and pick up some new tricks.

"This is not a local magicians show," said Danny Selnick, president of Ring 50 of the International Brotherhood of Magicians, the local chapter of the worldwide fraternity of illusionists and other masters of deception. "This is Las Vegas comes to Alexandria."

There will be some local magicians, both taking part in the lectures that will take up Friday night, April 5, and the early part of the day on Saturday, April 6.

But the real treat comes Saturday night, when the auditorium at Bishop Ireton High School turns into a star-studded performance. 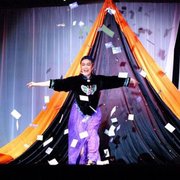 Juliana Chen, the first woman to win the World Congress of Magic, is one of several headliners for Magi-Whirl 2013, at Bishop Ireton High School on April 6.

Featured this year is Juliana Chen, a woman born in China who defected to the United States via Canada and became the first woman named World Champion at the World Congress of Magicians, earning her the title of the First Lady of Magic. A specialist in a wide variety of tricks, including a mask that changes colors on its own and cards that appear in an endless stream when she clicks her fingers, Chen has served as the artistic director of the Shanghai International Magic Festival, and the Athens Festival of Illusion at the Gialiono Music Theater from 2005 through 2007.

Also on the bill is Brad Ross, one of the youngest illusionists to lead the Disney Live! series of performances with Mickey Mouse and other familiar characters, appearing with the tour since 2006. He'll be flying in to give a lecture to the magicians participating in the convention on Friday night and Saturday before taking the Bishop Ireton stage Saturday.

Other headliners include Master Payne, who has served as the official house magician of the Camlann Mediaeval Fair for more than 30 years and is one of the best-known magicians in the Seattle area, and John Carlson, a former New York City police officer who traded in his siren for the happy shrieks of children at birthday parties across the country.

"This is a chance for the community to see superstars," said Michael Taggert, the show's organizer. "That's the whole purpose of the show. It's not just another dance troupe or symphony or school play. It's something you don't see in the Washington area very often."

Taggert and Selnick are responsible for the event, Selnick as the Ring 50 president and Taggert as the show's producer. But they're quick to point to the magicians flying in from across the country and around the world to bring their talent to Alexandria for a night of fun.

"Last year, we had three international superstars come in," Taggert said, adding that there are a few people already contacting him for future conventions as far away as 2015.

Ring 50 had a convention for many years, starting in the 1960s, but after a while the conventions fell away. But in the recent past, it was rediscovered that Ring 50's bylaws require an annual convention, Taggert said.

TAGGERT ALSO WORKS with another big name in magic, albeit one based more locally. Eric Henning has made quite the name for himself, performing at least once for the Obama family in addition to occasional gigs throughout the area, including one coming up at the Old Town Theater in Alexandria the week after the convention.

Henning describes his magic style as "very old school but with a twist." In magic, as in life, everything old is new again, and he specializes in up-close magic, where the illusion often occurs in an audience member's hand.

"I don't ask what's new, but what's old," he said. He got his start working Renaissance fairs and other open-air performances, where people had to be convinced to stop and pay attention and maybe, if they were impressed, drop a few coins in a hat or box.

He took up studying older types of magic tricks at the Library of Congress, where he would "read all the books" he could find, including one of the first books about magic, written by a skeptic. It was a big book, but there was "only one chapter on magic. The rest was how to prevent witches from being burned. Just because someone knew how to do a few tricks didn't make them a witch," Henning said of the book.

The best magic tricks are like Shakespeare — timeless and well received by nearly any audience at any point in history. That's what Henning tries to focus on in his performances, he said.

Part storyteller, part actor, his performances are theatrical and meant to bring the audience into his world. He plays the part of a wizard, and if he does his job well, he doesn't need to explain that it's all make-believe. "People understand," he said.

"Magic for me is seeing the magic happen" for people in the audience, he said. "People seeing something for the first time, they get that look on their face."

Taggert and Henning both have high praise for the technical theater students at Bishop Ireton, who do all the lighting and technical work for the performances. After one Magi-Whirl convention a few years ago, Henning was told by one of the headliners, who had a residency in Las Vegas, that the students were the best technical crew he'd ever had.

Henning, from Laurel, Md., isn't the only local performer on the bill. Other members of Ring 50 will be warming up the audience both inside the auditorium and in the lobby before the show starts, and among the performers will be Drew Owen, based in Northern Virginia.

"I love to perform magic," Owen said of why he wanted to be a part of the show. "At its best, magic gives us hope by making the impossible seem possible. I do a lot of kids shows involving costuming and props so I really like it when I get the chance to perform very close up, with only a deck of cards or a few coins."

He'll be walking around the auditorium before the big event, helping "get [the audience] into a magical mood for the main show."

He, like Taggert and Selnick, is eager to see what the other magicians can do and hope to learn a few new, well, tricks.

"I'm interesting in all of them," Owen said. "I've never seen any of them perform live but I have seen video and they all have very different performance styles. The magicians who planned this event did a great job of putting together a performance with tremendous variety and really top notch magicians."

Selnick said he expects "100-plus" magicians to participate in the convention, whether taking in lectures or picking up new tricks and supplies from a wide variety of magic dealers during the weekend.

Henning said the highlight of the event for him is what happens after the show is over, when the magicians get together and try to out-magic each other.

"We're lousy with good performers in this area," and getting a group of them together to see who can do new tricks, or old ones in new ways, so the others can't figure it out is a real treat, he said.