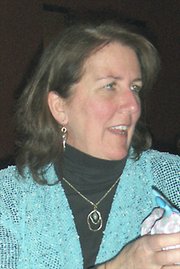 Founder Julie Sussman opens a present from the Social Change members during the anniversary celebration.

Founded by Julie Sussman of Centreville’s Rocky Run community, Social Change was born in March 2011. Sussman’s idea was to get people together in a fun and informal way to discuss their favorite causes, share food and wine, visit with old friends and make new ones.

The group’s comprised of residents from Centreville, Chantilly, Clifton, Oakton and Fairfax. And each month, they gather to learn about and raise funds for various charities and endeavors.

Explained member Chio Stokes: “We have to realize that the world doesn’t get any better unless we do something to help.”

Last Wednesday, March 20, though, was different. Members went to the banquet room of the new Coyote Grill restaurant in Centreville’s Centrewood Plaza where they enjoyed a meal and deejay music in celebration of Social Change’s second anniversary.

During the evening, new member Kevin Whalen told the group about the upcoming Police Unity Tour fundraising bike ride in which he participates. And member Celeste Peterson mentioned her April fundraiser for the Erin Peterson Scholarship Fund.

The group also presented gifts and a card to Sussman in appreciation for her creating Social Change, in the first place. “Thank you, Julie,” said Mary Carson. “You’ve brought so much into our lives; you’re a God-given gift.”

In response, Sussman said, “It’s been an honor and a privilege for me to meet you all and learn about the causes near and dear to your hearts. Thank you for being so supportive of the mission of Social Change.”