Mark Shriver To Speak at Potomac Library on May 6
Votes

Mark Shriver To Speak at Potomac Library on May 6

Son reflects on his father. 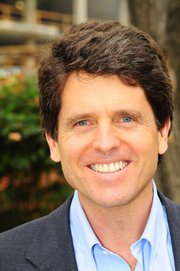 Mark Shriver commented that almost every day of his adult life, while at college and after college, his father, Sargent Shriver wrote a letter to him. “It might have been typewritten and copied to my brothers and sisters — or it might have been handwritten just to me. Often he would write about a favorite book, a sports event — his thoughts on the world news. Some I read, and some I put off reading until later. I have boxes of these letters that I have saved.”

Now Shriver has written his own letter to his dad in his book, “A Good Man: Rediscovering My Father, Sargent Shriver.” In this highly personal reflection of his life and his relationship with his father, Shriver asks the question, “How did my father accomplish all that he did, balancing faith, community, incredible work responsibilities, family, friends — and do it with such joy?” Shriver will discuss his book on May 6 at 7 p.m. at the Potomac Library. 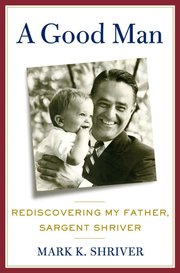 “I discovered when trying to answer this difficult question that his faith was the bedrock of all he did,” said Shriver. “He attended mass at 6 a.m. each day, he viewed everyone as coming from God — and treated each person the same from the President to the people who worked in his favorite restaurant. He had an incredible amount of energy, did not need much sleep, and lived by the highest of moral principles.”

Born in Westminster, Md. in 1915, Sargent Shriver was the driving force behind the creation of the Peace Corps. He founded the Special Olympics with his wife, Eunice Kennedy Shriver as well as the Job Corps, Head Start, VISTA, Upward Bound, Foster Grandparents and many other life-changing programs as a significant designer of LBJ’s “War on Poverty” programs. He served in the Kennedy and Johnson administrations, was appointed ambassador to France and ran unsuccessfully as George McGovern’s running mate in the 1972 Presidential election. In 1993, Shriver received the Franklin D. Roosevelt “Freedom From Want” Award. On Aug. 8, 1994, he received the “Presidential Medal of Freedom,” the United States' highest civilian honor, from President Bill Clinton. Shriver was diagnosed with Alzheimer's disease in 2003. He died on Jan. 18, 2011 at age 95.

Through much soul searching, through people’s tributes when his father died, and through personal stories from friends and family, Shriver gained insight his father’s life — and discovered much about himself. He discovered that the three guiding principles of his father’s life — faith, hope and love — energized his father and made everything possible. Sargent Shriver had boundless optimism and exuberance. He was always smiling and filled with idealism. Mark Shriver pulled all his memories together in his book, making it the story of his father’s legacy, but also a revealing portrait of a son seeking to learn how to gain the inner joy and peace that his father had. It’s also the story of a son dealing with the loss of his father through the progressive stages of Alzheimer’s.

“I’m a work in progress,” Shriver said. “I’m always trying to be a better husband, dad — and social activist. I’m proud to be working with Save the Children. Every day we are involved in making children’s lives better by providing food, health programs, ensuring their safety after disasters and much more. Our goal is to ‘create lasting change in the lives of children in need in the US and around the world.’”