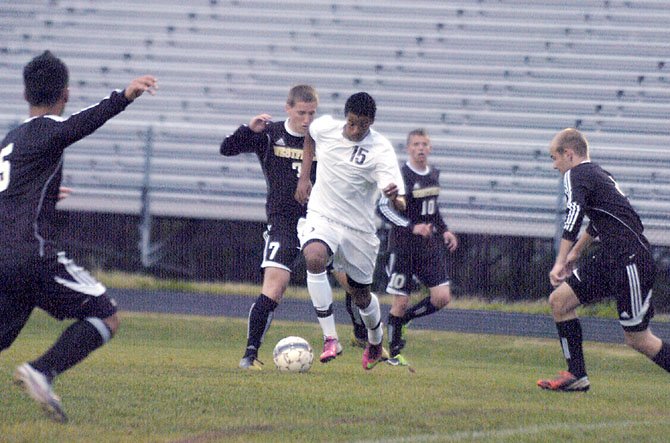 Oakton junior forward Ben Cisse scored the lone goal in a 1-0 win over Westfield on Monday. Photo by Craig Sterbutzel.

Vienna — The Oakton boys’ soccer team completed an undefeated regular season on Monday with a 1-0 victory against Westfield at Oakton High School.

While compiling an 11-0-2 record is a notable achievement, head coach Todd Spitalny said the Cougars hadn’t talked about remaining unbeaten, instead choosing to focus on larger goals. In fact, the aspect of Monday’s victory most likely to help Oakton’s cause was simply the contest’s competitive nature.

Prior to facing Westfield, the Cougars won five of their previous six games by at least three goals. Oakton was often able to relax late in games with victory all but assured. On Monday, the Cougars were

locked in a scoreless tie with the Bulldogs until junior forward Ben Cisse found the back of the net in the 68th minute.

“We haven’t thought about the undefeated record once this year,” Spitalny said. “That’s not our goal. ... Our goal was to win the regular season and go after the district title [and] give ourselves a shot in

the regional [tournament] and go from there. … We’re just starting to get guys back healthy so we’re trying to mix guys back in, still. We’re scoring a lot of goals, but part of our problem is we have not had to play our guys a full game yet—other than [during ties against] Lake Braddock and Herndon—so tonight was great because we finally had to play the guys full force.”

Prior to the Westfield win, Oakton’s last five victories came against Wakefield, Centreville, Chantilly, Robinson and Yorktown by a combined score of 23-6.

“To grind out a game like this, this is really good for our team. We’ve been able to step back for the last 30, 40 minutes of each game, but this game, we really had to fight to the last whistle.”

“To grind out a game like this, this is really good for our team,” senior midfielder Patrick Moore said. “We’ve been able to step back for the last 30, 40 minutes of each game. But this game, we really had to fight to the last whistle.”

“I thought we played really well,” Westfield head coach Sean Lanigan said. “ … Our goal was to stop [Oakton senior midfielder] Patrick [Moore]. He was their big playmaker—and Christian [Ollen]—so we man-marked him with my captain and I thought he did an outstanding job. Patrick was not a factor in this game at all.”

The Cougars earned the Concorde District’s No. 1 seed. They will have a bye in the first round of the district tournament and are automatically in the Northern Region tournament.

With the arrival of the postseason, the Cougars have already reached some of their goals—and they just happened to be undefeated, as well.

“We have unfinished business,” Spitalny said.