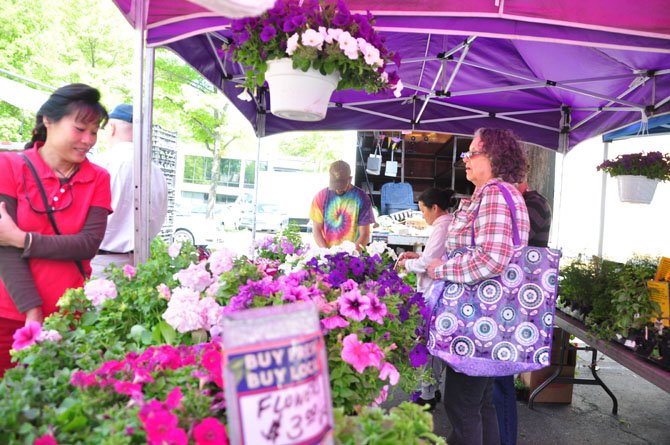 Customers at the Reston Farmers Market browse flowers for sale by Glascock’s Produce Saturday, May 4. Photo by Alex McVeigh.

Reston — The Reston Farmers Market opened its 2013 season Saturday morning, May 4, at Lake Anne Plaza. The market returns stronger than ever this year, with new additions including the county’s first seafood vendor at a farmers market. 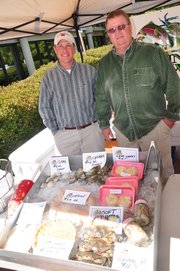 From left, Brian Dooley and Lee Arnest of Arnest Seafood are the first seafood vendors at the Reston Farmers Market.

Arnest Seafood from Hague, Va. has set up shop at the market, offering crabs, oysters, clams, catfish, flounder and more.

“Today was the first day I’ve ever done a farmers market and it’s going well. It’s nice to get a sense of what people are interested in,” said Lee Arnest, owner. “Starting next week we’ll be bringing in live crabs, and we can even start bringing them cooked if people request.”

ANOTHER NEW ADDITION is a first for the market. The Farm at Sunnyside is a certified organic farm featuring a variety of produce. The 400-acre farm, located in Washington, Va. also has an onsite biologist that tracks the various wildlife on the property.

“We’ve currently got a lot of greens and asparagus, but we’ll have double the produce within the next few weeks. Eventually we’ll have veggies, orchard fruits, berries and pasture-raised brown eggs, which are the only thing we have that aren’t organic, but they’re certified GMO-free,” said Sean McDermott, the farm manager. “One of our signature items is our sweet cherries, we’re one of the only places around that has those.”

McDermott said their French breakfast radishes were one of their most popular items on the market’s opening day, selling out in a little more than an hour.

“Something we’ll have starting in August is baby ginger. We’re one of the only farms on the East Coast that grows it,” he said. “It’s very different than the woody root that people find in the stores. It’s not fibrous, not woody, not stringy and you don’t peel it. It’s pink and gleaming and really good. It’s very popular at our other markets.”

The third newcomer to this year’s market is Moo Thru, a dairy from Fauquier County. They carry skim, whole and chocolate milk and 28 flavors of ice cream from owner Ken Smith’s grass fed cows.

“Because we own the cows and the farm, we’re able to control the quality from grass to milk,” said Smith, who is the fourth generation dairy farmer in his family. “One of our signature ice cream flavors is Ken’s Key Lime, which is a flavor you don’t see too often. I worked hard on that one, because I love key lime pie so much.”

“I started coming to this farmers market about two years ago in search of the usual fruits and vegetables, but I found so much more,” said Elaine Shepherd of Reston. “Now I get my bread, milk, meat and even occasional flowers here every Saturday. It’s a full shopping experience.”

Also new to the market this year is Paul Walsh and his Pedicab, which will be available to bring people and their purchases to their cars, usually parked along North Shore Drive, especially helpful for people that can’t carry multiple bags uphill.

The market will be at Lake Anne every Saturday until November from 8 a.m. to noon.