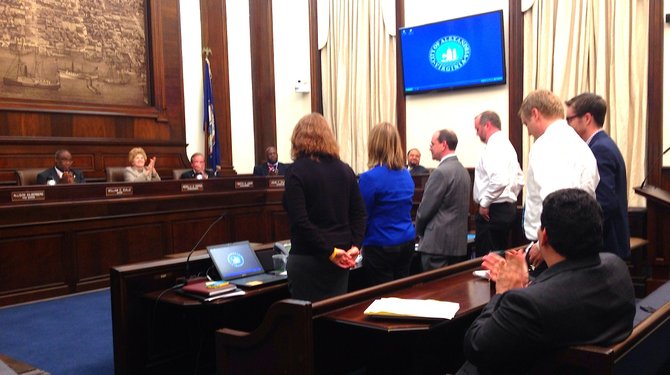 Members of the Alexandria City Council unanimously supported a historic four-cent hike in the tax rate this week, raising the average residential property tax bill $314 to $4,888. The $624.8 million budget is $37 million more than last year, including $6.1 million more for schools and an extra $1 million to pay down the debt. The four-cent increase in the tax rate — from $0.998 for every $100 of assessed value to $1.038 for every $100 of assessed value — is the largest tax increase in recent memory.

"That is not something that any of us on this dais are certainly proud of," said Mayor Bill Euille. "But we worked within the perimeters that we are dealing with."

When Democrats on the City Council raised taxes back in 2009, Republicans were able to seize the moment and use the issue to help unseat two incumbent members. Then Democrats changed the rules, moving the city elections from a few weeks after the budget vote to November, when a record number of Democrats were expected at the polls to support the incumbent president. Now the two Democrats who lost in 2009 have returned, and the newly installed council members have approved a historic tax increase.

"This is a perfect example of what happens when you have a one party government," said former City Councilman Frank Fannon, one of the recently ousted Republicans. "It's a clear sign to the taxpayers of Alexandria that saving them money is not a priority of this council."

DURING A MONDAY night session at City Hall, members of the all-Democratic council said raising taxes on Alexandria property owners was necessary to fund long-neglected capital needs of the city such as filling potholes and expanding the Chinquapin aquatics center. They also restored several cuts proposed by City Manager Rashad Young, including cuts to everything from the Warwick Pool and library hours to gang prevention and car-seat installation. The new tax rate will raise the average residential property tax bill $314 to $4,885.

"This is a very large tax increase at a very difficult time for our residents," said Councilman Justin Wilson. "This should be the tax rate that we assume is going to be for the foreseeable future."

One of the highlights of the budget approved this week is the increased investment in the city's capital improvement program, which funds about $1.23 billion worth of projects over the next decade. Several council members said the city's capital spending has been neglected for years, leaving many projects unfunded — until now. One of the leading drivers of the need for capital spending is the public school system, where Superintendent Morton Sherman is calling for four new schools that will serve Kindergarten through the eighth grade. Although he requested $18 million for capital spending this year, he was pleased that council members funded the School Board's request of $14 million rather than the city manager's proposal of $10 million.

"I think it would have been very hard to deal with what the city manager was proposing," said Sherman after the final budget work session Monday night. "I think we're in good shape."

IN ADDITION to higher tax bills, Alexandria citizens will also be hit with a number of new fees — from increased parking fees and fire prevention permit fees to higher impound service charges and mulch delivery fees. Vendors at the Market Square farmers market will be hit with yet another fee increase to rent a stall, the second increase in the last five years.

"Some vendors will have to drop out because they can't afford these hikes," said Lynn Julia Pendlebury Colby, a pottery vendor. "And we still haven't received an accounting of what the market expenses are."

The budget season began back in February, when Young proposed a $626.6 million budget that was balanced with a tax rate of $1.053 for every $100 of assessed value. In March, council members advertised a rate of $1.038 — setting a maximum rate allowed under the law. Elected officials made some modifications to the city manager's budget, adding back some of the reductions even though some members raised concerns about lingering concerns about future capital spending needs. Council members provided an additional $6.97 million for capital projects.