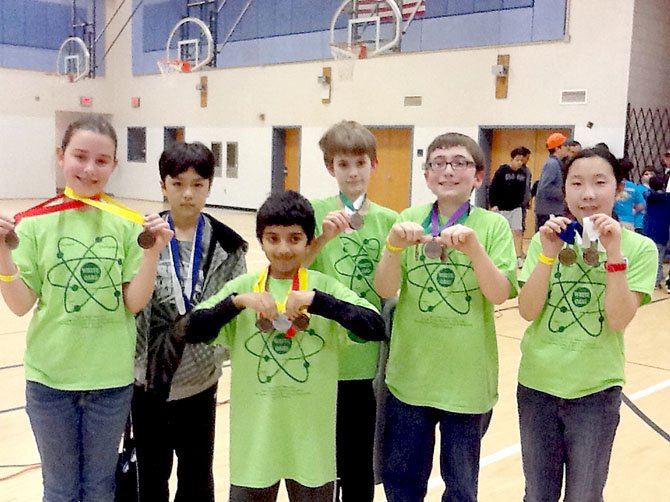 With 22 different categories from engineering, chemistry and forensics to medical science, children from the fifth and sixth grades at White Oaks Elementary in Burke worked hard to make it all the way to the state level of the Science Olympiad tournament.

The children won medals in two events at the state tournament at Virginia Tech on April 27—Kathy Kang and John Shim placed third in meteorology while Serena Utech and Mahesh Menon placed fourth for “Write It Do It.” For the meteorology medal the children had to look at certain constellations, name them and tell the age of the stars. For “Write It Do It” the children had constructed an object which they had to describe in detail to the other child who had to build it exactly to the specifications given.

“We had a wonderful day at the Science Olympiad state tournament at Virginia Tech. The kids enjoyed every aspect of it,” said Margot Higginbotham, a fifth grade teacher at White Oaks. “The tests were very hard, and they competed against top middle schools from around the state. I am so proud of our students,” she said.

According to the website, “Science Olympiad is a national non-profit organization dedicated to improving the quality of K-12 science education, increasing male, female and minority interest in science, creating a technologically-literate workforce and providing recognition for outstanding achievement by both students and teachers.” And it was under the guidance of Usha Gopal and with the help and assistance of the parents and teachers at White Oaks that the children went as far as they did.

“The team has been working with adult mentors after school and at weekends over the past couple of months,” said Higginbotham. It was all this work that also led them to successfully compete and come home with 11 medals from the regional competition held in Centreville in March.

“Thanks go to Usha Gopal for managing the organization of this group, and the many parent and teacher volunteers who coached the students,” said Higginbotham.