The Battle of Ox Hill
Votes 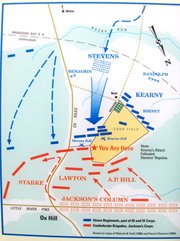 A map of the Battle of Ox Hill. Union generals’ names are in blue and Confederate generals’ are in red.

The Battle of Ox Hill, the Confederate name for what the Union Army called the Battle of Chantilly, took place on the afternoon of Sept. 1, 1862. The fighting occurred during a fierce storm that field reports described as so thunderous it drowned out the cries and clamor of the battle.

Dry ammunition became scarce and the fighting degenerated into a brawl of bayonets and musket clubs. The chaotic conflict lasted a little more than two hours and ended at dark as a stalemate. Two Union divisions under the command of Gen. Isaac Stevens and Maj. Gen. Philip Kearny engaged Confederate troops at Ox Hill and both commanders were killed.

The events at Ox Hill were triggered by Confederate Gen. Robert E. Lee's attempt to outflank the retreating Union Army. After the battle of Second Manassas along Bull Run on Aug. 28-30, 1862, the Federal Army retreated toward the well-protected capital city of Washington.

Ox Hill marked the end of the Second Manassas Campaign. After the engagement, the Federal Army completed its retreat to the fortifications around Washington. The Confederates turned north and crossed the Potomac River, igniting the Maryland Campaign.

At Ox Hill, the fighting was spread over some 500 acres of farmland and woods on either side of what is now West Ox Road between Route 50 and Fair Lakes Parkway, and between Fair Oaks Mall and the Fairfax County Parkway. Much of that area today is covered by housing and commercial business outlets.

So Civil War preservationists stepped forward in the 1980s to protect the current 4.8-acre park site from the development that encompasses the rest of the battlefield. The Fairfax County Park Authority owns and maintains Ox Hill Battlefield Park to protect and enhance it as a historical resource.