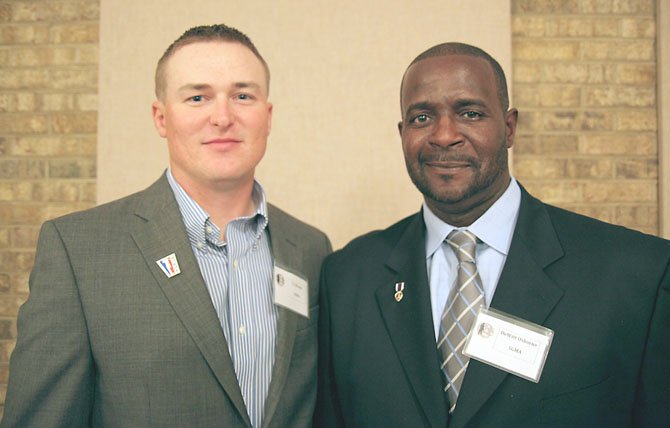 On Thursday, May 16, the Northern Virginia Military Ministry Outreach hosted a benefit dinner at Messiah United Methodist Church in Springfield to raise money for the Fort Belvoir Wounded Warrior Golf Program (FBWWGP). By pairing PGA professionals with returning disabled veterans, the program aims to “support the Army’s commitment to the rehabilitation and successful transition of the wounded, ill, and injured soldiers back to active duty or veteran status.” But as the participants of the program can attest to, it achieves so much more.

Sgt. DeWitt Osborne is retired Army and a current Warrior Golfer who was hit with an IUD outside of Baghdad in 2005. He almost lost one arm and his right leg. After enduring 21 surgeries with two prosthetic vertebrae, a plate, and four screws, he found himself going back and forth between a psychologist and a physical therapist at Walter Reed Army Medical Center and sinking into depression.

“I gained so much weight, I was almost 275 lbs. I had no time for exercise, nor did I want to exercise. Every time I went to the doctor, he kept telling me what I couldn’t do anymore, which gave me less and less hope.”

While still at Walter Reed, Osborne was put in contact with professional golfer and co-founder of the Salute Military Golf Association, Jim Estes.

“I went one day to the course with Estes and I have been seeing him ever since. I think I still have blisters from that first session from gripping the club too tight,” said Osborne. “The game, in general, gave me a sense of accomplishment and it was at that point my life started to change.”

One of the major strengths of the program is that the experience can be shared by the whole family, helping heal not only the physical, but the invisible wounds. “When you’re a Wounded Warrior everyone wants to know where you got hit,” said Osborne. “But just as damaging as the physical wounds are the ones you don’t see, the invisible wounds that can impact your whole family.”

Retired Marine Sergeant T.J. Brooks also grappled with depression and loss of purpose after sustaining major injuries, but found solace and a renewed sense of accomplishment in the game of golf.

“After you get injured you think—what am I gonna do next? What can I excel at?” asked Brooks. “Well, after working with Jim I dropped 57 strokes off my golf score. This program really brings you back into the brotherhood of those men and women you served with.”

Rick Zarlengo, a PGA professional who volunteers with the FBWWGP, was the first to speak at the benefit dinner. “These guys work so hard to get back to where they were before, you just can’t ask for better students," said Zarlengo. “My commitment to them is based on their appreciation of what we do and it makes me want to show up every time.”

In 2012, the FBWWGP touched 95 lives including the Wounded Warriors, caregivers and their families. Funds raised for the program pay for lunch, range balls and a small stipend to reimburse the PGA professionals for their gas expenses. At the dinner held at Messiah UMC, over $7,500 was raised for future golf clinics.