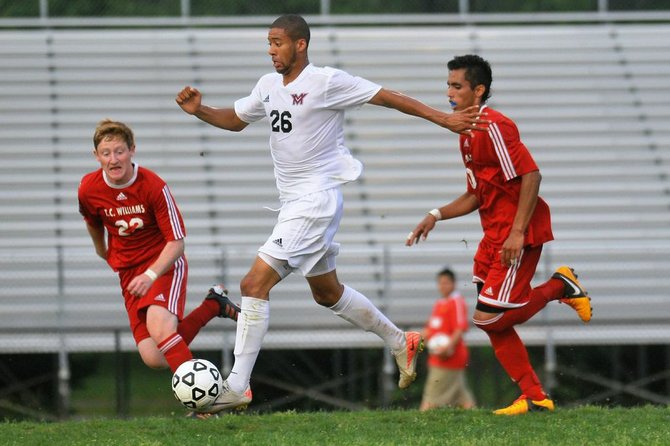 Rahim Costa-Dorsey and the Mount Vernon boys’ soccer team beat T.C. Williams in a penalty-kick shootout during the Northern Region quarterfinals on May 23. Photo by Louise Krafft.

Mount Vernon — Lucas Belanger stared up at the sky as he laid on the Mount Vernon soccer field just outside of the Majors’ team huddle following a Northern Region quarterfinal match on May 23. Moments later, the senior goalkeeper sat up, crossed his right leg over his left and reflected on what had just occurred.

“Still taking it all in,” Belanger would say, “… we can go to states.”

A year ago at this time, the Mount Vernon boys’ soccer team suffered a heartbreaking loss to Robinson in the region quarterfinals, falling short in a penalty-kick shootout without the services of Belanger. This time, facing T.C. Williams, Mount Vernon’s 6-foot-2 netminder was back on the field and making a major difference.

Belanger made three saves during a PK shootout with the Titans, including the game-winner, as the Majors held on for 1-1 (2-1) victory on May 23 at Mount Vernon High School. The Majors advanced to the semifinals where they will host Woodson at 7 p.m. today.

“That was one of the longest games,” Belanger said of the TC match, “I’ve ever played.”

Last season, Belanger, who received All-Met honorable mention from the Washington Post as a freshman in 2010, left the Mount Vernon program to focus on preparing for soccer at the collegiate level. Diego Castro, then a sophomore, took over for Belanger and his performance has drawn praise from teammates. Castro started the 2013 campaign as the Majors’ goalkeeper, but during the season, Belanger decided he wanted re-join team, creating a potentially awkward situation.

“I talked to all my teammates and I got their ideas if they would want me back,” Belanger said. “I had to earn my spot; it wasn’t going to be guaranteed. I wasn’t just going to walk on and start … but they were all accepting … and happy for me to come back.”

“Lucas said that he wanted to earn his spot back. He said I’ve got to earn the respect and trust of my players back and tonight he sure as [heck] did that.”

Belanger’s first game back with the Majors was against Hayfield on May 2. Belanger and Castro split time during the season, with each keeper playing a half. After Belanger played the first half against T.C. Williams in the region quarterfinals, Mount Vernon head coach Tony Garza decided to play Belanger in the second half, as well, a decision Garza called “the hardest” he had to make that night.

“When Lucas came back [to the team], my first thought went right to Diego,” Garza said. “I told him before I didn’t lose any faith in him whatsoever. They’ll split halves. Lucas said that he wanted to earn his spot back. He said I’ve got to earn the respect and trust of my players back and tonight he sure as [heck] did that.”

Mount Vernon took a 1-0 lead when senior captain Cedric Ekoue scored on a header with an assist from Derick Agyemangduan in the 10th minute. The Majors held the lead until the final minute of stoppage time, when TC’s Eryk Williamson scored on a header off a corner kick from Neil DeWakar, sending the game to overtime. 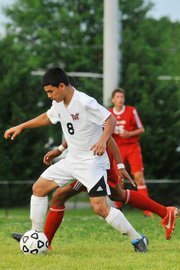 “Keeping them focused after that happened was the hardest thing,” Garza said. “As a coach, you can scream and yell but that’s not going to do anything. The boys, their emotions, their anger, their fear and frustration, everything overcame them --- disappointment, everything.

After four overtime periods, a penalty-kick shootout would decide the match. After three rounds, Mount Vernon led 2-1, with Rahim Costa-Dorsey and Erik Rodriguez making their PKs for the Majors. From that point, Belanger saved the Titans’ final two attempts to secure victory for Mount Vernon.

Belanger was the hero on this day, but the Majors praised both goalkeepers.

“We were pretty disappointed that he left us last year, but we had a great goalkeeper, Diego, step in,” Ekoue said. “… We’re happy to have two great keepers. Diego is just as good at PKs as Lucas is, but today Lucas stepped in, Diego supported as he should as a teammate and [we] pulled off the win.”

“Diego is one of the best keepers for his age group,” Kargbo said, “and Lucas is freakin’ amazing.”