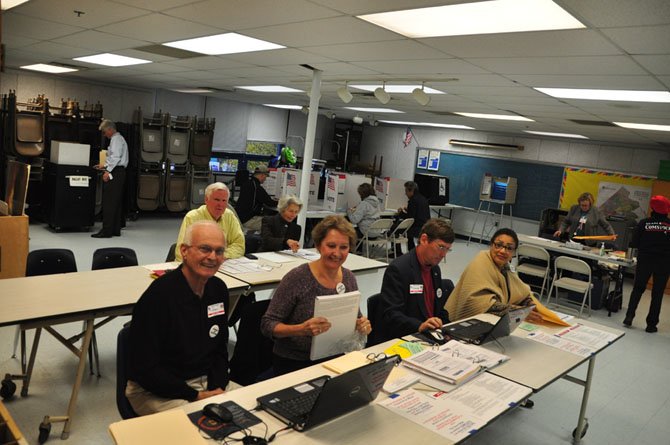 McLean — On the first Tuesday of November last year, the halls of Langley High School were filled with lines of people waiting to cast their vote for president. On Tuesday, Nov. 5, the lines weren’t quite as long, but voters throughout McLean went to their respective precincts throughout the day. 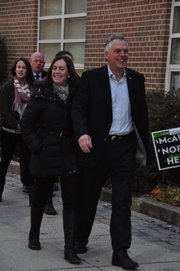 “By not being able to re-elect an incumbent, we’ve got a shot every four years to tell our leaders what we want this state to be,” said Francis Grant of McLean. “I think we’ve had a great run over Governor McDonnell these past four year, and the next four are just as important, which is why I’d like to see his legacy continue with the election of Ken Cuccinelli.”

McAuliffe, a McLean resident, cast his vote early at Spring Hill Elementary School, at about 6:30 a.m., surrounded by chanting supporters.

“I’m optimistic about today, I know we have huge challenges to face as a state, but with huge challenges come huge opportunities,” he said. “If I’m fortunate enough to be elected, I think we’ll see that people in this state are ready to come together in a bipartisan way and get things done.”

At Cooper Middle School, where voters in the Cooper precinct voted, Democratic precinct captain Nancy Fatemi noticed what could be a change in the typically Republican-voting precinct when it comes to the 34th delegate district race.

“We’ve been getting a good turnout this morning from women, who have mixed opinions, but I think they’re concerned with women’s rights in this race,” she said. “I think a lot of women who might normally vote for [Republican incumbent] Barbara Comstock are voting for [Democratic challenger] Kathleen Murphy because women’s rights come first for them.”

While some said they were not in favor of Comstock’s stance on personal rights issues, others said they have deeper concerns with Murphy’s platform.

“I don’t want to see a lot of new taxes in Fairfax County, which I believe the Republicans stand for,” said Marcia Close of McLean. “And given Kathleen Murphy’s past when it comes to not paying taxes, I can’t believe she has the audacity to even run for office.”