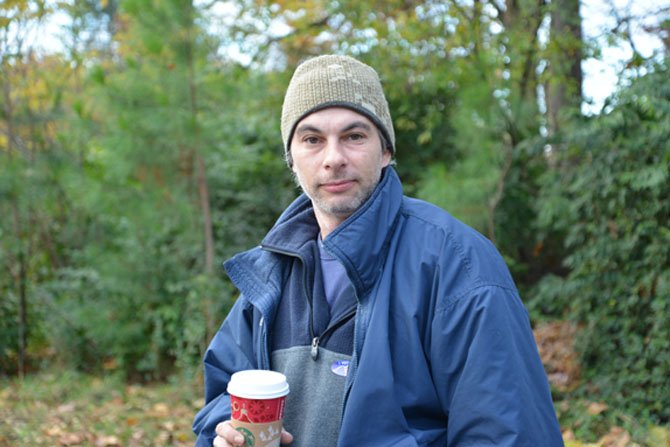 Jeff McLaine voted for Democrat Terry McAuliffe mostly because of his stand on women’s issues and on personal privacy. McLaine cast his vote at Dogwood Elementary School on Glade Rd., where he attended school "a few years ago," he said. "I just think Cuccinelli doesn’t represent women." Photo by Andrea Worker. 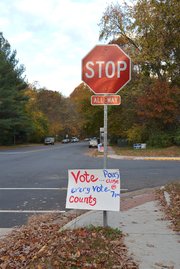 Voters are urged to "STOP and VOTE" outside Dogwood Elementary School in Reston.

"No big rush. Just a strong, steady stream." That’s how Craig Dubois described the scene at Armstrong Elementary on Lake Newport Road in Reston as he offered sample ballots – with a Democratic twist - to arriving voters. "I’ve never done this before," said Dubois. "I’m just filling in for my wife. She’s usually the one out here." Dubois seemed pleased with the turnout as of 7:45 a.m. "People are getting in and out fast enough, but there hasn’t been a real slowdown yet."

The lack of long lines worried Michael Chang, who stopped to vote before heading to work in Arlington, just a bit. "It’s nice not to have to stand outside in the cold for hours like I did last November, but I hope this doesn’t mean that the turnout will be very low. This is an important election, especially for the governor." Chang is not the only one keeping a close eye on the governor’s race in Virginia. Considered a key swing state, pundits and political powers-that-be are all keenly interested in how Virginia votes, believing that over the last decade the Commonwealth has best reflected the nation’s changing demographics and overall political attitude, citing that the state’s popular vote precisely matched the national popular vote numbers in the last two presidential elections.

Carol Thompson doesn’t think "someone should start their political career as a governor." She voted for Cuccinelli, saying "McAuliffe has no experience in office, and he is not from this state. That’s what they use to call a ‘carpet bagger,’" she declared. Thompson also strongly opposes Obamacare, something that Cuccinelli has fought from day one.

Another reason they’re watching the Virginia results? Many analysts see the contest between Republican Attorney General Ken Cuccinelli and his opponent, Former Democratic Party Chairman Terry McAuliffe as critical toward gauging the "values temperament" of the voting public. Cuccinelli hails from the conservative wing of his party and has promoted being the first Attorney General to fight against the Affordable HealthCare Act. McAuliffe has run numerous campaign ads attacking Cuccinelli on his stands against abortion and legislation that he supported that many see as limiting women’s rights. Political strategists believe that whoever takes the Governor’s Mansion will be sending a message on what the American voter is really interested in. Those already plotting the 2016 Presidential runs are particularly interested to see if swing-state Virginia ends up with a Democratic Governor, Lt. Governor and Attorney General to work alongside their two Democratic Senators, Mark Warner and Tim Kaine.

Kim Bodden was really upset when she heard that the Women’s Clinic is Fairfax had closed down. "For awhile, I had no health insurance and that was somewhere I could go and get medical care that I could afford." Bodden puts part of the blame for the clinic’s closure at Ken Cuccinelli’s doorstep and that was one the reason’s she voted for his opponent, Terry McAuliffe, for governor.

Poll Watchers did report lines over at Dogwood Elementary just as the polls opened at 6 a.m. An hour later the lines had dissipated, but voting traffic at the school on Glade Road was fairly brisk, much like the temperature. At Dogwood, baked goods, coffee, and what looked suspiciously like left over Halloween candy was on offer to reward the good citizenship of the voters. Angelique Simmons lives just around the corner from the school. She was out this morning knocking on her neighbors’ doors, reminding them to "get out there and vote, no excuses." "It’s a good thing they all know and love me," she laughed, "what with me ringing that doorbell at 6 a.m. But some people just need a little reminder to do what they should."

Both polling venues reported smooth sailing, with no mechanical glitches or voters at the wrong precinct.