Bridge on Route 29 Set for Replacement 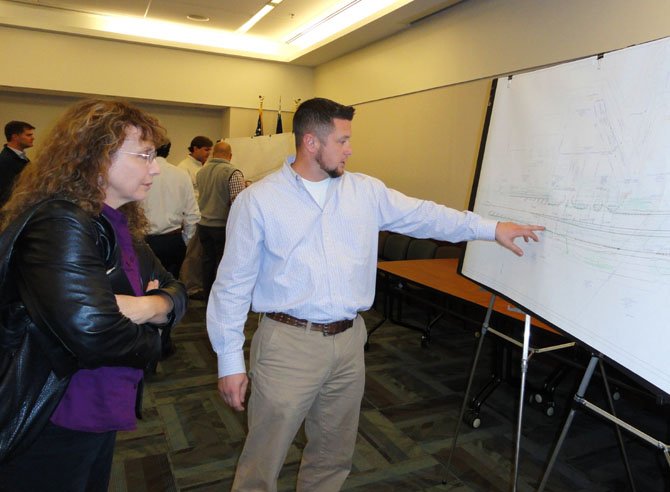 Seth Bourne of Shirley Contracting discusses the replacement of the Route 29 bridge over Little Rocky Run with Ann Peters-LaBrash. Photo by Bonnie Hobbs.

Work will begin in a few weeks to replace the Route 29 bridge over the Little Rocky Run stream in Centreville. Besides improving the bridge, itself, the project will also result in a new sidewalk and shared-use path.

The new bridge will go from .2 miles east of Pickwick Road to Union Mill Road and will be just under a half-mile long. It’s a VDOT project, with Shirley Contracting Co. overseeing the design, utility relocation, right-of-way acquisition and construction.

“We expect to start work, the first part of November,” said Design/Build Project Manager Seth Bourne, with Shirley. “We anticipate completion in October 2015.”

VDOT held a “pardon my dust” meeting, last Wednesday evening, Oct. 23, at its Northern Virginia District Headquarters on West Ox Road to update local residents on the project’s status. A diagram of the project was on display and several Shirley representatives were on hand to answer residents’ questions.

One of the attendees was Ann Peters-LaBrash, with Fairfax County Public Schools’ Office of Transportation. “I came to find out the start date and learn about the phases,” she said. “I’m trying to figure out if the [school] buses will need to be rerouted.”

But Bourne didn’t expect it to be a problem since any Route 29 lane closures wouldn’t be done during peak, morning and evening traffic hours. Instead, they’d be between 9:30 a.m.-3 p.m. and again from 8 p.m.-5 a.m.

“Any lane closures would be temporary, as needed,” he said. “And we don’t expect much night work, if any.”

Built in 1932, the existing bridge is 22 feet long and is now considered by VDOT as structurally deficient and functionally obsolete. It’s not unsafe, but it requires an increasing amount of monitoring and maintenance. So this project will bring it up to state standards — and to do so, the bridge will be lengthened to 150 feet and elevated some 3 feet higher than it is now.

In addition, to connect each end to existing roadway elevations will require 700-800 feet on each side of the roadway to gradually tie it back into Route 29. The bridge will be built six lanes wide to accommodate future traffic, but will initially be striped for four lanes.

Construction will take place on the south side of the bridge, where there’s more room to work and less impact to residents. A 16-foot-wide, raised, grass, median strip will separate north- and southbound lanes. Each outer lane will be 15-feet wide, with the outermost 3 feet earmarked for bicycle riders.

Currently, there’s no way to cross the bridge safely as a pedestrian. But on the south side of the road, the new bridge will also contain a 10-foot-wide, asphalt, shared-use path or trail, connecting to existing trails. And on the north side, there’ll be a five-foot-wide sidewalk connecting to the Faircrest community and existing sidewalks.

According to VDOT, the Route 29 bridge carries nearly 36,000 vehicles per day, but no detours will be necessary during the work. Access to businesses and homes will remain, and two lanes going north and south will be open throughout construction.

The estimated cost is $14.5 million: $1.2 million for preliminary engineering, design work and environmental research; $5.3 million for land acquisition and utility relocation; and $8 million for construction. The project is fully funded, mainly by federal, bridge-replacement funds.

“During the first phase, the existing median will be demolished and repaved so we can keep traffic on the north side of the proposed center lane,” said Bourne. “All the eastbound traffic will be on one lane for about 12 feet so we can construct the bridge. We’ll also relocate one water line, plus overhead utilities.”

Shirley Assistant Project Manager Trent Williams said the traffic switch should be done by the end of November. “It’ll stay that way until about August 2014, when drivers can be shifted south onto the new bridge,” he said. “All the shifts will be very gradual and tapered to maintain the existing 45-mph speed and keep two lanes open in each direction.”

“Then we can build the bridge on the north side while both eastbound and westbound traffic are on the new bridge,” said Bourne. “By about May 2015, both bridges should be completed.”

Some 20-30 people will be out there working during the most labor-intensive portions of the projects. Crews will be solely dedicated to either building the bridge, doing storm-drainage relocation or relocating the utilities.

“By August 2015, we’ll tie the median into the project, and the two bridge structures will become one,” said Bourne. “And by the middle of that month, we should have substantial completion, with everything finished in October 2015.”