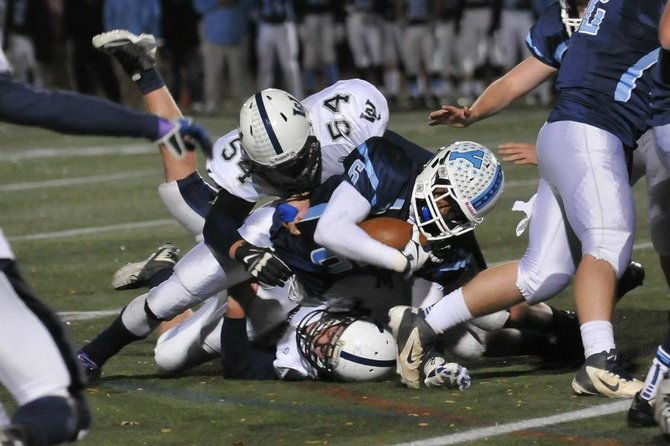 Washington-Lee quarterback Sam Appel, left, scored the game's lone touchdown and running back Daquay Harris rushed for more than 200 yards during the Generals' 10-0 victory over Yorktown on Friday at Greenbrier Stadium.

For the second time in four seasons, the Washington-Lee football program turned the home field of its Arlington rival into a site of historical achievement.

W-L earned its first district championship since 1975 with a 10-0 victory against Yorktown on Friday night at Greenbrier Stadium. A 20-yard field goal by Henry Casey in the third quarter put the Generals ahead to stay, and senior quarterback Sam Appel added a 1-yard insurance touchdown early in the fourth.

W-L finished the regular season with an 8-2 record and went undefeated against district foes. Yorktown also went 8-2, with its only district loss coming against W-L.

“It’s a community win,” W-L head coach Josh Shapiro said. “The community that we work in and love and embrace is successful, but when you carry something like this on your shoulders for 30 years, it weighs on them. I think it’s leveling the playing field, saying hey, we can compete with the best. I think it’s a huge uplift for the school and the Washington-Lee community.”

Football will continue to recognize district champions through the 2014 season despite the VHSL’s move to a six-class system, which replaced districts with re-aligned conferences. Washington-Lee, Yorktown and Hayfield transitioned from the National District to Conference 6 in the 6A North region, which includes five teams from the former Liberty District.

On this night, however, the Generals celebrated as National District and Arlington County champions.

“I’m proud of all these seniors that came together and were able to do something special,” Appel said. “It’s four years in the making and it ended right.”

This wasn’t the first time W-L earned a historic victory at Greenbrier Stadium. In 2010, the Generals snapped a 28-year losing streak against Yorktown, beating the Patriots on their home field in the quarterfinal round of the regional playoffs. On that night, W-L running back Anthony Taylor was the best player on the field, carrying 42 times for 255 yards and four touchdowns en route to a 28-7 win.

“It’s a community win. The community that we work in and love and embrace is successful, but when you carry something like this on your shoulders for 30 years, it weighs on them. I think it’s leveling the playing field, saying hey, we can compete with the best. I think it’s a huge uplift for the school and the Washington-Lee community.”

On Friday, the best player on the field from a talent standpoint was Yorktown running back/defensive back MJ Stewart, who is committed to play for the University of North Carolina. Despite being hobbled by an ankle injury, Stewart made a big play early in the game, thwarting a W-L scoring opportunity with an interception at the goal line. But a team effort by the Generals was enough to overcome the Patriots’ star athlete, who was limited to 37 yards on 16 carries and three receptions for 38 yards.

The W-L defense handed Yorktown its first shutout loss since the Patriots were blanked by Centreville in 2010.

“You know you have to account for No. 6 (Stewart) and you do damage control around him,” Shapiro said. “… What we said is, look, we have a locker room full of good, talented seniors that have inspired our juniors and sophomores to step up and show them the right way and we felt like we had a … full team. We felt like this was something that was an advantage to us, that we had multiple weapons.”

The leader of the W-L defense Friday night was senior lineman Peter Griffin. Listed at 6 feet 1 and 230 pounds, Griffin, who missed his entire junior season with a shoulder injury, wreaked havoc in the Patriots backfield, sacking quarterback Will Roebuck on multiple occasions.

“I know how important this is to him because he had to sit out the whole last year because of a shoulder injury and he just played out of his mind all night,” Appel said. “He stepped up on the biggest stage possible and he just worked so hard. We were all saying, ‘This is amazing. He looks like the best player on the field every single play.’”

The W-L offense moved the ball well for most of the night but failed to score during each of its first three trips inside the Yorktown 10-yard line. The Generals drove to the Yorktown 8-yard line in the first quarter but Stewart intercepted Appel on third down. In the second quarter, W-L reached the Patriots’ 6, but Casey missed a 23-yard field goal attempt.

During the opening possession of the second half, W-L drove inside the Yorktown 1-yard line, but the Patriots stuffed Appel’s attempted sneak on fourth down.

W-L finally capitalized on its next opportunity, when Casey booted a 20-yard field goal with 3:30 left in the third.

Yorktown’s ensuing possession ended when W-L defensive back Dwayne Williams intercepted Roebuck and returned it into the end zone. A W-L penalty during the return negated the touchdown, but the Generals started deep in Yorktown territory. After an 18-yard run by Daquay Harris took the ball down to the Patriots’ 1-yard line, Appel pushed his way into the end zone for a touchdown and a 10-0 lead with 11:44 remaining in the fourth quarter.

Harris had a big night on the ground, carrying 32 times for 227 yards. Appel completed 8 of 16 passes for 102 yards and an interception. Trevor McManus had four receptions for 68 yards.

W-L and Yorktown each qualified for the 6A North region playoffs, which start next weekend.

“We haven’t won the district since ‘75,” Griffin said, “so for us to really put our name on it, it’s like a dream come true.”