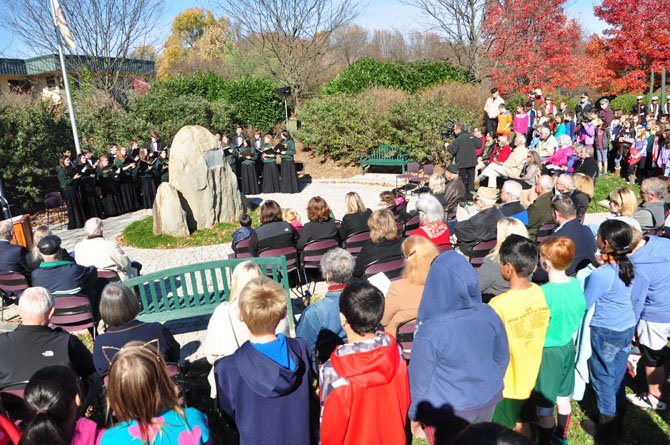 Great Falls — More than 100 citizens gathered at the Great Falls Freedom Memorial on the 11th hour of the 11th day of the 11th month Monday to pay tribute to Americas’ veterans. 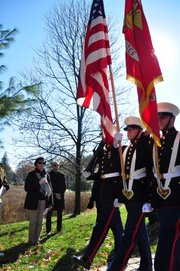 “I’ve always thought what we do here is a perfect example of small town patriotism,” said Andy Wilson, vice president of the Friends of the Freedom Memorial. “We do three events per year here at the memorial, Memorial Day, a 9/11 remembrance and Veterans Day, which takes on additional importance for me. I hope everyone here will remember the words of George Washington: ‘The willingness with which young people are willing to serve in any war, no matter how justified, shall be directly proportional to how they perceive the veterans of early wars and how they are treated.”

The ceremony, one of three annual events held at the Freedom Memorial, featured performances by the Langley High School Madrigals, an invocation and benediction from Pastor Dave Zucchelli of Smith Chapel United Methodist Church and the presentation of colors from the U.S. Marine Corps Color Guard Detachment.

“These ceremonies always bring in the best, and today was no exception,” said Shirley Babel of Great Falls. “The Madrigals’ songs were just beautiful and very fitting to hear while the wind was blowing the American flag, and the Marine color guard was also a wonderful touch.”

The event’s keynote speaker was John “Sandy” Pidgeon, a Great Falls resident and former Navy SEAL. Pigeon served as a SEAL platoon commander or Vehicle Delivery Teams, did two tours as a member of SEAL Team Eight and served two years as a Special Warfare Plans and Exercises Officer.

He was the military detailee at the CIA and was the first SEAL co-pilot of the Advanced SEAL Delivery System, a dry combatant submersible designed to deliver SEALs to remote locations. He has served tours in Somalia, Haiti, Iraq and Afghanistan. 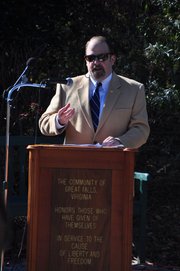 Pidgeon recalled one of the most inspiring experience he had ever had with a veteran. He decided to visit a SEAL officer in the hospital who was wounded during a firefight in Fallujah. Though the man had several wounds, including several gunshots to the face, something caught Pidgeon’s attention just outside the hospital room.

“I look at his door, and there was an orange piece of construction paper with some handwriting on it. It said ‘Attention all who enter here. If you’re coming into this room with sorrow, to feel sorry for my wounds, go elsewhere. I got them in a job I love, doing it for people I love, supporting the freedom of a country I love deeply… The room you are about to enter is a room of fun, optimism and serious, rapid re-growth. If you are not prepared for that, go elsewhere,” he said. “That piece of paper is now a bronze plaque on that door, it has been affixed to the door.”

Pidgeon said that while veterans are honored, on Veterans Day and others, he hoped they would give back by sharing their experience.

“Planting seeds is something we as veterans need to start thinking about. We’re here to take a moment to celebrate each other’s service, but we have an obligation to pass on those lessons whenever and to whomever we can. Whether in a conversation with other adults, with kids or on a comment thread online and to our elected representatives,” he said. “I hope all of us will keep the torch burning, because there are those that would like to see it doused."