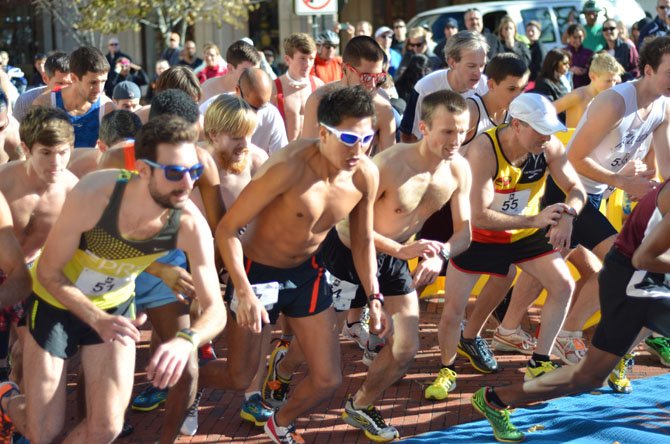 On Nov. 9, runners in the male elite or men's competitive mile group begin their race. Photo by Ryan Dunn

On Saturday, Nov. 9, Reston Town Center was filled with visitors who came to participate in the Nearly Naked Mile. Kelly Kavanaugh, a head coach at Potomac River Running, was emceeing the race. "It is a great race that benefits burn victims at Medstar Washington Hospital Center," said Kavanaugh. The event had a total of 560 people registered to participate, with a registration fee of $30.

Runners were welcomed to dress in attire that made them feel comfortable. Among those participating in this year’s race was Rudy Arca who suffered from 2nd and 3rd degree burns in October 2012 and was transported to Medstar Washington Hospital Center. The Burn Center at MedStar Washington Hospital Center is the only adult burn treatment center in the Washington metropolitan area. "I have benefited from the burn unit and now am racing this year," said Arca.

"This is my first time running this race," said Kristin Swisher. "It turned out to be nice weather, and there was a great crowd out as well." Swisher and her husband Benjamin Swisher joined in from old town Alexandria. 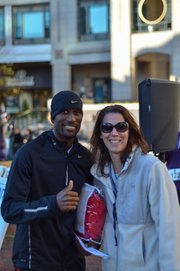 Moïse Joseph, a Haitian middle-distance runner who competed in the 2004 Olympic Games in Athens, ran in the men’s competitive mile or male elite race. "It is a great race," said Joseph. "The environment is wonderful." The Northern Virginia Firefighters Emerald Society Pipeband also attended and performed as runners completed their races.

The Nearly Naked Mile race was split into five categories or heats: male elite, female elite, 6-8 minute division, 8-10 minute division, and the 10 minute or more division. Each race is electronically timed using the IPICO tag system. For the Male Elite, open winners were 1st place Moïse Joseph with a chip time of 4:20, 2nd place Baisa Ktesa with a chip time of 4:21, and 3rd place Kevin McNab with 4:22.

For more information on the Nearly Naked Mile, visit http://www.prraces.com/naked