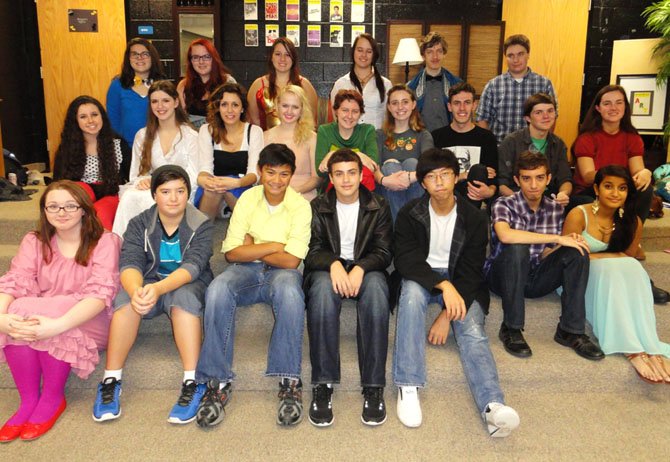 Featuring a cast and crew of nearly 40, Fairfax High presents the romantic comedy, "Almost, Maine." It tells stories about love and the ups and downs of everyday life in a place that never quite became a town, hence the name Almost.

"I’m super-impressed with the kids’ talent and their reaction to my style of direction, which is new to them," said Director Erich DiCenzo, in his first year at the school. "I communicate to them as one actor to another. I talk to them about who their characters are, their feelings and why they’re that way."

Doing so allows the students to uncover their characters’ real motivations and the truth behind their words. They know DiCenzo has high expectations for them and they’ve risen to the challenge. He even describes them as "college-level actors creating real moments onstage. So this show feels like you’re watching a sitcom or a scene from a movie."

Since playwright John Cariani wrote such a "beautiful, relevant script," said DiCenzo, his actors were "eager to begin rehearsals because of the words they had to work with, and they wanted to perform it well. The story reminds us of the importance of love and the connections we make with other human beings, and how powerful those connections can be."

Junior Caroline Silas, who plays Glory, said the action unfolds via several vignettes. "You meet the characters, connect with them quickly and fall in love with them," she said. "Everyone in the town is connected in some way. Glory’s a free-spirited, friendly, young woman who always acts on her whims. She wanted to be somewhere new and ended up in Almost."

Glory sets up camp in a repairman’s (played by Z.J. Jang) yard, and Silas said they work so well together that "it seems natural and real. When I saw this play last year, I immediately loved Glory; I like playing cheerful scenes and fun characters. The show will make the audience laugh and cry. It’s so heartwarming, I think they, too, will want to move to Almost, Maine."

Stage manager is senior Vicki Clinch, who works with the actors to ensure the playwright’s message comes across. During the performance, she said, "For every light and scene change, every sound and every mike going on and off, I’ll communicate with the tech crew and tell them when to do it. I love it and hanging out with my theater friends."

But her favorite thing is set construction and, for this show, scenes take place on porches, a bench, outside and at a bar called the Moose Paddy. "We’re building a raised, double-sided, rotating porch," said Clinch. "I love working with power tools and with my hands and teaching the tricks of the trade to the underclassmen."

Sophomore Renee Rozell portrays Marvalyn. "She’s a bit of a tough girl and a gossip," said Rozell. "She has a lot of issues, but can’t vocalize them; so, instead, others go to her for help. But some of her issues come out as she gives advice, so she’s not always helpful."

She enjoys playing Marvalyn. "Her scene has lots of jokes and slapstick humor," said Rozell. "And I love how, in rehearsals, we really take the time to go into depth with the character work. The audience will like the quirky characters and will be able to relate to their stories."

Playing Chad is senior Daniel Serpati. "He’s a young man who’s tired of dating and is ready to take the next step," said Serpati. "He’s done the same routine every day and is feeling lost, but he’s ready to find himself. It’s a fun role because so many fantastic things happen to him, yet they seem so natural onstage. The scene explains how everyone goes through the same feeling of falling in love."

Calling "Almost, Maine" a funny show, Serpati said, "Each scene will make people feel uplifted. You can’t help but smile. There’s a story for everyone in the audience where they’ll think, ‘I know what they’re feeling.’"