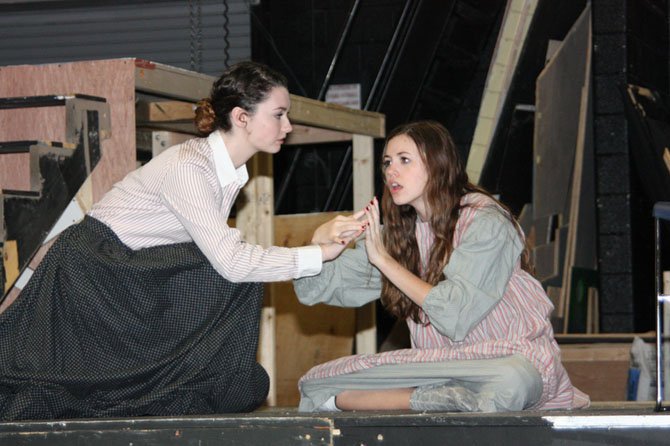 Most people know of Helen Keller, but not everyone knows how her inspiring story came to be. They are about to find out as South County High School Theatre presents their fall production of "The Miracle Worker," Nov. 21-23.

Immortalized on stage and screen by Anne Bancroft and Patty Duke, this classic tells the story of Annie Sullivan and her student, blind and mute Helen Keller. Taking place in Tuscumbia, Ala., in the 1880’s, "The Miracle Worker" dramatizes the volatile relationship between the lonely teacher and her charge. Trapped in a secret, silent world and unable to communicate, Helen is violent, spoiled, almost sub-human and treated by her family as such. Only Annie realizes that there is a mind and spirit waiting to be rescued from the dark, tortured silence. With scenes of intense physical and emotional dynamism, Annie's success with Helen finally comes with the utterance of a single, glorious word: "water." Written by William Gibson in 1956, and directed by Arthur Penn, the play was first presented at the Playhouse Theatre in New York City in October 1959.

South County drama teacher and show director, Kathie McCormally, chose the play because of the challenge it presents for students. "Helen is both deaf and blind, and 6 years old. To get a student to capture all three elements is very challenging," she said. "Annie must be believable from beginning to end. Her character is very intense as she struggles with her own set of demons while attempting to reach Helen and teach her to communicate."

Directing the show for the third time, McCormally says of double casting the lead roles, "I have found that having two casts creates a certain bond among the actors as they work together helping each other over the rough spots. In the end, both casts will be stronger."

A heartwarming story of triumph, "The Miracle Worker" will appeal to the entire family. "The students are working very hard to ensure that it is done right," McCormally added.

The show runs Nov. 21 and 22 at 7 p.m., and Nov. 23 at 2 p.m. and 7 p.m. at the Dale S. Rumberger Auditorium at South County High School, 8501 Silverbrook Road, Lorton. General admission at the door is $8, and $6 for senior citizens and students. Discounted tickets can be purchased in advance at www.southcountytheatre.org.