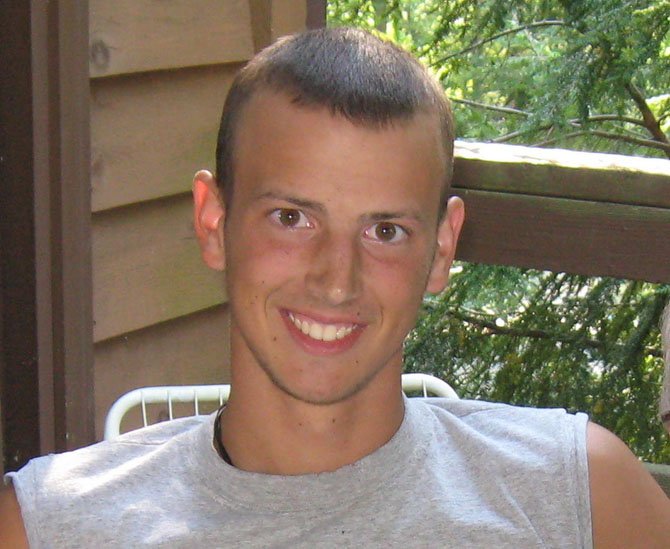 If he’d lived, Nick Franca would be celebrating his 24th birthday on Dec. 4. But the Town of Clifton native and 2009 Centreville High grad died of a form of cancer called neuroblastoma, in May 2011, at age 21.

His death devastated those who knew and loved him, and they will always carry him in their hearts. Yet it’s not just because he died so young, it’s also because of the person he was and the way he lived – fearlessly and with gusto.

And on Saturday, Nov. 30, from 9 a.m.-3:30 p.m., the first annual Live Like Nick Did (LLND) Blood Drive will be held at Clifton Presbyterian Church, behind Trummer’s parking lot, in Clifton. Besides honoring his memory, the event’s proceeds will fund research and a college scholarship.

“Giving blood is universal – everyone can give the gift of life,” said Nick’s mother, Caryn Franca, who organized the event. “And it’s so important for the people needing it, such as those going through cancer treatment or people who’ve been in an accident.”

But more is planned than a blood drive. “We’ll also have a raffle of some very cool items, plus an awesome bake sale to raise funds for our two causes,” said Franca. “There’ll be cupcakes from Clifton’s new shop, Cupcaked, and several local people and groups are also contributing homemade baked goods. It’ll be a big party and a fun day.”

RAFFLE TICKETS will be $10 each, and the prizes include: A weekend getaway in Sandbridge, in the Virginia Beach area; an iPad mini; a $200 gift certificate to Fair Oaks Mall, a Paperwhite Kindle; a gift certificate to Clifton’s new, Italian restaurant, Villagio; a wine pairing at Trummer’s on Main; jewelry from All that Glitters; and two box-seat tickets to see “The Lion King” at The Kennedy Center in July.

In addition, Clifton’s Amy Waldrop will be taking photos from 11 a.m.-3 p.m. For $20, people may have their children or pets photographed with Santa; Waldrop will also take family photos without Santa. The church is at 12748 Richards Lane and childcare is available. Those attending the event are advised to bring cash or a checkbook, since an ATM machine won’t be available.

“Even if people can’t donate blood, they can drop by and buy a few raffle tickets and some baked goods,” said Franca. “But hopefully, we’ll get 100 blood donors.” People are advised to sign up for an appointment in advance at www.inovabloodsaves.org and enter sponsor code 8025. Or call Inova blood at 1-866-256-6372 and give that same code number.

In 2007, Franca helped establish the nonprofit Band of Parents – comprised of parents of children with neuroblastoma – to fund nontoxic treatments for them. And proceeds from the blood drive will be split between this group and a memorial scholarship in Nick’s name at Lynchburg College, where he attended when his health permitted. It’s given to students with a physical or emotional challenge.

Those unable to attend the event, but wishing to contribute to the scholarship may send checks payable to Lynchburg College to the college, Attn: Gene Frantz, 1501 Lakeside Drive, Lynchburg, VA 24504. Write “For the Nicholas Franca Memorial Scholarship” on the memo line.

“Before the summer of 2005, Nick was a normal teenager, hungry for a life filled with adventure, love and success,” said Franca. “When stage IV neuroblastoma invaded his dreams, he refused to let it take away his love for life.”

Throughout six years of treatment, he endured pain, suffering, humiliation and isolation from the world around him. But he did his best to maintain his indomitable spirit and refused to let his condition define him.

“He’d reach out to others in treatment, put his friends and family at ease and embrace each and every moment he could,” said Franca. “He never gave up and never let his circumstances deter him when he had a good day. On May 1, 2011, his body let go, but his spirit lives on – and we call it Live Like Nick Did.”

To donate to Band of Parents, go to www.bandofparents.org or www.llndblooddrive.com.

“Instead of waiting for the government or pharmaceutical companies to pay for research, we chose to find ways to fund it ourselves,” explained Franca. “To date, we’ve raised more than $3 million for a new treatment for neuroblastoma that’s helping many children live life outside a hospital. We’re bound together by hope that a cure is out there, and we want to make sure it’s found for all children facing this disease.”

Looking forward to the blood drive, she said Nick’s friends are also involved in the remembrance in a variety of ways, whether giving blood or volunteering. For example, Chris Gogoel built the event Website, Kristina Baranowski of Cupcaked will be bringing her tasty treats and Trexler Jasien’s family donated the Sandbridge raffle item.

SINCE NICK’S DEATH, Franca said she and her husband Jim and Nick’s siblings are doing all right and are honoring his memory by “trying to Live Like Nick Did, embracing life and living it to its fullest. Nick never let his disease get in the way of him having fun, and LLND is how we keep going.” She’s also hoping the blood drive will be a big success.

“Nick had to have so much blood and platelets, and I realized that someone had to donate it,” said Franca. “It meant a lot to me, so I want to be able to give it back to others needing it. For all the times we were grateful to have that blood, I want to make sure Nick’s legacy lives on in someone else.”