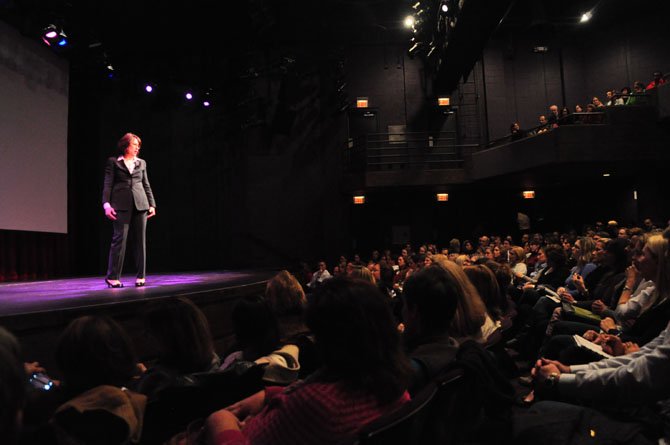 Dr. Madeline Levine, a psychologist and bestselling author, speaks to a packed house at the Alden Theatre Tuesday, Nov. 19. Photo by Alex McVeigh. 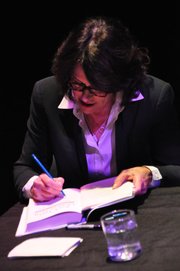 Dr. Madeline Levine signs a copy of one of her bestselling books at the Alden Theatre Tuesday, Nov. 19.

“This evening is a culmination of several events that have occurred in our community this fall,” said Karin Calpin, the SCC’s vice president of programming. “This evening is aimed at providing you with another opportunity to discuss solutions and helping our youth achieve authentic success.”

Levine has written two bestsellers about parenting and the issues children who come from well-off backgrounds can have.

“What we see in affluent communities, with educated parents who have the money to provide opportunity, are disproportionately high rates of anxiety disorders, depressions, substance abuse, cutting and psychosomatic disorders. It’s interesting that we don’t see that in young children, it really starts in the 9th grade and accelerates through 12th grade,” she said. “Those can be the kinds of students that seem to have everything going for them, and they’re not considered at risk, but they are very much at risk.”

LEVINE, A PSYCHOLOGIST based in Marin County, Calif., said she has noticed a shift in children’s attitudes and goals over the past decades, recalling a recent session with an 8-year-old patient that told her he wanted to “be a venture capitalist when he grew up.”

She cautioned parents in attendance against pressuring their children into thinking about colleges, grades and careers to the detriment of other development.

“Between the ages of 14 and 18, children are learning how to do a lot of things, from learning how to speak to the opposite sex, dealing with a changing body, learning their place in the world,” she said. “But if all of their attention is focused on GPA, what college they’re going to get into, there’s only 24 hours in a day, and the important things get lost. We need to fight against the idea of focusing all our attention on things that come down the line.”

Levine said that even today’s definition of success needs to be redefined.

“Our definition of success is far too narrow. Everyone talks about getting their student in the best high school so they can get the best GPA, so they can get into the best college and get an MBA from Harvard,” she said. “But such a straightforward path is something that maybe 10 percent of people have. Most of us change majors, fail at things, choose different careers. That’s natural.”

Levine took an informal poll of the 450 people in attendance at the Alden, and found that 34 of them followed what would be a “traditional” path through their adolescence into adulthood, approximately 8 percent.

“This is the best kept secret from children. When I talk to kids, they have no sense that their parents went through falling down, changing their minds, not being successful, taking risks,” she said. “Once you’re successful, people think you’ve always been successful. I think that’s how kids see us. They look at us doing well at work, bringing home a good paycheck, we seem satisfied, there’s a lot of stuff around the house, and they forget that for most of us, it was a real slog to get there, you needed an awful lot of perseverance, and that we all went through difficult times.”

THE OTHER SIDE of that coin is the phenomenon known as “helicopter parenting,” where parents are too involved in their children’s formative years.

She said that parents too often work toward remediating weaknesses, not enough time cultivating their children’s strengths.