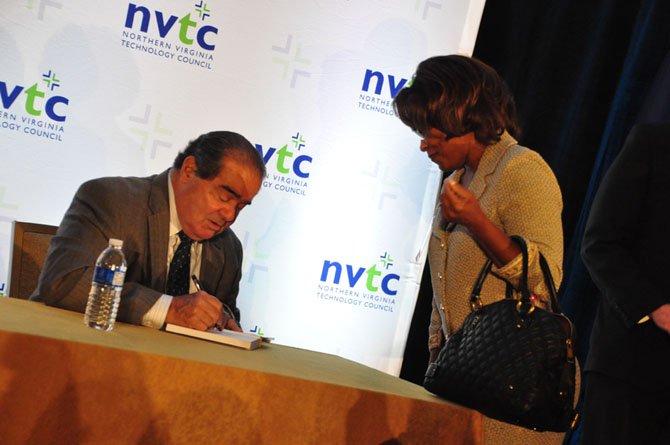 Associate Justice of the Supreme Court Antonin Scalia signs a copy of his book, “Making Your Case” for Karen Smaw Wednesday, Sept. 25 after addressing the Northern Virginia Technology Council. Photo by Alex McVeigh.

McLean — Associate Justice of the Supreme Court Antonin Scalia spoke to members of the Northern Virginia Technology Council Wednesday, Sept. 25 at the Ritz Carlton Tysons Corner. Scalia discussed his book “Making Your Case: The Art of Persuading Judges,” as well as his thoughts on several recent legal issues. 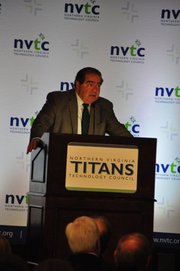 “It’s amazing what an ancient science it is advising people,” he said. “Persuading judges is not that different from persuading anyone else, except judges are a bit more uppity. Apart from that it’s perhaps one of the oldest advice-giving enterprises, advising people how to persuade somebody else. Those who have given advice on it include Aristotle, Socrates, Demetrius, Cicero and Quintilian.”

He advised the audience that, above all, they need to be well versed in whatever subject matter they are presenting.

“You will never persuade someone when you display in your presentation that you don’t know anymore about the subject than they do,” he said. “The reason judges listen to lawyers in front of us is that they have typically lived the case for months, if not years, and know more about the facts than anyone. But as soon as the person you’re talking to realizes that you don’t know more than them, you’re out.”

He cautioned against repeating points though, saying, “if you’re going to beat a dead horse, then the dead horse will end up beating you.”

He was asked about the recent NSA spying program in the news, and what the Supreme Court’s opinion on it might be.

Scalia cited the Fourth Amendment, which says that people have a right to be “secure in their persons, houses, papers and affects against unreasonable searches and seizures,” and described his evolving thoughts on the matter.

“The first case I heard involving wiretapping involved a wiretapping by state police, and we held that conversations are not persons, houses, papers and affects, so it’s not covered by the Fourth Amendment,” he said. “Twenty years later, we did an about face and said that conversations are protected, that besides persons, houses, papers and affects there is a generalized right to privacy that comes from parts of the Fifth Amendment. The consequence of that is that whether NSA can do the stuff it’s been doing, which used to be a question for the people or Congress to resolve, it will not be resolved by the branch of government that knows the least about the issues involved.”

Scalia was appointed to the Supreme Court in 1986 by Ronald Reagan. He described how the legal system has evolved since then.

“In my early years on the court, it was rare that one lawyer would appear even once a year, every year, much less more than once a year,” he said. “But now the large firms have developed a Supreme Court practice, I’m not sure how much money there is in that, but it’s a prestige thing. Some have a substantial Supreme Court bar of former solicitors general who appear three, four times a year. I think that’s a help to the court, because we’re seeing people who do a better job. In the old days, if a lawyer was lucky enough to get his petition granted, he was going to argue it himself, and very often was not that good at it.”