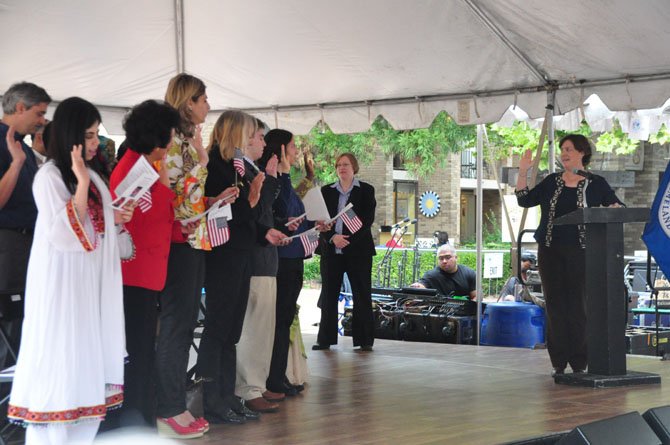 Reston — Nearly 50 years ago, Robert Simon founded Reston with several goals, and one of them was diversity. For the past 12 years, the Lake Anne of Reston Condominium Association, Reston Community Center and Reston Association have hosted a tribute to that goal, the Reston Multicultural Festival. 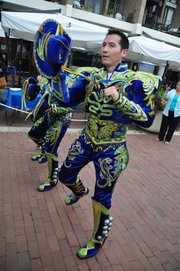 “This event calls out the foundation of who were are, and exhibits that we try to live it every day,” said Supervisor Cathy Hudgins (D-Hunter Mill). “This festival has become to go to place to enjoy the spirit of Reston, that we are a welcome and open place that gives us all a chance to grow, be together and share our values.”

This year’s festival took place Saturday, Sept. 28, and it was the third year that it began with an official Naturalization Ceremony. Twenty-five individuals from around the world said the Oath of Allegiance and received their citizenship certificates.

“When you take that oath, you will be as much of an American citizen as I am. You will have the same responsibilities to make this a better country, to help us live up to our ideals,” said Rep. Gerry Connolly (D-11), speaking to the country’s newest citizens. “We are enriched by waves of immigration, by people who understand and take pride in their new country [and] remind us of what we believe. And that’s our responsibility, to help us make this an even greater country, help us live up to my ideals.”

Connolly recalled that when he moved to Fairfax County, 3 percent of the population was foreign born.

“Today, that percentage is 27 percent, and Fairfax County is better for it,” he said. “If you look at any index, educational achievement, the number of jobs we’ve created, median household income, much higher than it was 35 years ago. The crime rate is lower than it was 35 years ago. One can only conclude that their presence, their willingness to undertake the responsibility to become a citizen has made us a stronger and better place.” 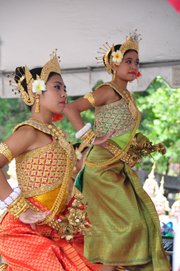 Bolivian dance troupe Alma Boliviana helped guide guests from the World Stage at the plaza to the Global Stage in the parking lot. The group started dancing at the plaza fountain, and used their signature dance and outfits to lead interested attendees to the first performances of the day.

“I thought the dancers were a great way to get people involved from the start, it gave the performances an interactive twist, because we could just follow them,” said Shima Kendrick of Reston. “It definitely got me in the spirit.”

While performances took place on both stages, the inside of the Reston Community Center Lake Anne hosted an international book fair, as well as a series of live performances and storytelling exercises.

“This is an opportunity to share in the diversity that is so special to this community,” said Beverly Cosham, chair of the RCC Board of Governors. “At Reston Community Center we take pride in the fact that we serve our patrons in 10 different languages.”

THE LIVE PERFORMANCES took people through a variety of cultures, from Asian dancing to the arts and crafts of the Caribbean.

“My favorite event so far has been the Cambodian musicians and dancers,” said Amy Teller of Vienna. “I thought the music was just perfect, and the dancers moved with such grace along with it that it was very striking.”