Getting Around: Turtzi the Turtle — A 13-Year Saga
Votes

Getting Around: Turtzi the Turtle — A 13-Year Saga 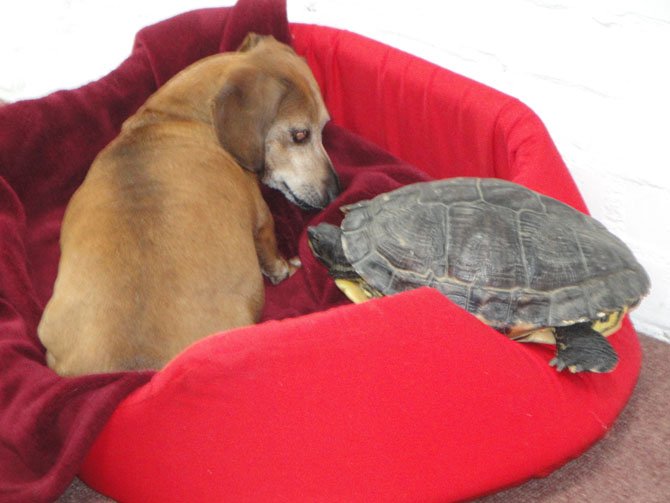 “I‘m not so sure I need company,” Salime, one of the Crook‘s three dachshunds, seems to be thinking, as Turtzi makes her way into the dog bed. Salime is Italian for one sausage. Photo by Miriam Crook

By By Cissy Finley Grant

Potomac — It’s a Painted Turtle, notice the caps. It’s not a drawing, not something covered in latex, and certainly not a thing of beauty, except for maybe in the eyes of the beholders.

This Painted Turtle, is a lumbering aquatic creature Miriam and John Crook have living in a bath tub in their Potomac home. That is, it’s in the bath tub when it’s not swimming in their pool where it loves to play bump ‘em with them, unless there is a guest included she doesn’t recognize. “Then, she dives to the bottom and won’t surface until our friend leaves,” Miriam said. 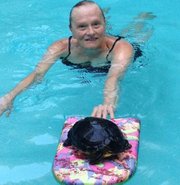 Turtzi the turtle enjoys a ride on a kick board piloted by Miriam Crook. The turtle loves swimming in the family pool, if no strangers are around. When a guest comes, Turtzi dives to the bottom and stays there.

This is an honest-to-goodness story about a turtle named Turtzi. It might help to explain some of the turtle’s anecdotes when her name was questioned. “Oh, we just gave her a little class. Instead of just Turtle we decided on Turtzi. Sort of like, Mitzi. It was Turtle fancied up,” Miriam said.

“We had just moved to Rome. All of Italy goes to the beach in the summer. I was just wandering around and decided I needed a little companionship. It was in the summer of year 2000, when Miriam wandered into a pet store and purchased a turtle, “the size of a quarter,” she indicated with a thumb to finger gesture.

Miriam’s husband, John, was general consul for MFO (Multi National Force and Observers), a peace-keeping force in the Sinai and traveled extensively. Hence the reason for Miriam’s need “for a little companionship.” Turtzi became more than just a companion she became a mystery to both of them throughout their four-and- a- half- years stay in Rome.

Turtzi, now 13, has had numerous companions. In one way or the other, they have all disappeared. Perhaps, because shortly following the purchase of Turtzi, they took her to a “Blessing of the Animals” celebration at Rome’s San Antonio Abate Church. Her blessing must have stuck. Turtzi is the only one left to date, even though when she arrived in the USA from Rome, Miriam was holding high above her head, two Painted Turtles. Unlike Turtzi, the second one has long since disappeared, name forgotten. “I do remember fellow passengers screaming in terror when they saw two large turtles. They do have a habit of hissing when they encounter strangers and strange places,” she said.

Prior to leaving Rome, Turtzi had numerous experiences to prepare her for most any unexpected happenings. For the uninitiated, Painted Turtles grow to be about 10 inches long. Their top shell, known as a carapace, is dark green to blackish with yellow or red lines. The head and feet have more distinctive yellow lines. It’s not hard to find them if you know where to look.

However, when Turtzi went among the missing from the Crook’s upper floor apartment in a Rome building, it was pretty much ascertained she had fallen off the balcony and was gone for good. “We figured she was caught somewhere, maybe in a hedge,” Miriam said. But, she wasn’t to be found until one day there had been a terrible downpour of rain. “I came home from shopping and there she was sitting on the front porch,” she said. That was six weeks after Turtzi had taken the plunge from the fourth floor.

When the Crooks moved from city life in Rome to a nearby farm on a lake, Turtzi went along to enjoy country living. It was during this time John befriended a neighbor’s dog and agreed to care for him while the owners went away. En route to putting the dog to bed one night, and following the pup in the dark to his dog house, John fell into a dry well and broke his leg. Unfortunately, he was due to leave shortly thereafter for a two-week session in The Netherlands.

Turtzi was to remain at the farm in her tank. Also, unfortunately, when the Crooks returned they discovered Turtzi had crawled out of her tank.

“No,” the farmers who owned the property and lived nearby said. “We haven’t seen the turtle.” Again they gave her up for lost. Soon thereafter, they were moving once again, this time to a hotel and were preparing to head back home to the states, with John still on crutches. “We left the farmhouse lady our hotel number, just in case,” he said. Once again, Turtzi came through. The Crooks received a call from the farm owner saying new renters had called to say they had found the turtle.

Turtzi the Painted Turtle made her way to the U.S. and officially is now a Maryland turtle. Like everything else in which Turtzi has been involved, it wasn’t easy. The Crooks had to contact the Federal Fish and Wild Life Service in Maryland to be assured she was legal. “I had to use all my best Italian to explain to the Carabinieri at the airport that she was not an endangered species, “ John said. It is legal to import a Painted Turtle into the USA.

However, Turtzi’s life in Potomac has continued to be one adventure after another. There was the time when the Crooks were on vacation and their son, Victor, came to take care of her. While in Barbados, the Crooks received a call that Turtzi’s heater in her bath tub had shorted out when she was in her tub. It was severe enough to melt her plastic water house. Turtzi had escaped electrocution.

Another time, had it not been for Miriam’s curiosity about an unfamiliar noise behind their home, Turtzi would have become carrion for a couple of hawks. “I was watching her after putting her outside and noticed something was with her, but thought it was a squirrel. I went to get a camera and glasses and then saw the hawks. I went flying out there and grabbed her. The hawks actually chased us. I had taken their dinner,” Miriam said.

Turtzi lives quite comfortably in the Crook household, along with three dachshunds she enjoys except when they try to show her who is boss. One day Salime (Italian for one sausage), the eldest of the three, noticed Turtzi digging down deeply into the pachysandra. Apparently Salime did not approve of this and pulled her out by her head before Miriam could get to her. “It left a dent in her head,” Miriam said. Turtzi had gotten cold and was trying to hibernate. Salimie was lucky Turtzit didn’t bite back.

Turtles will bite, in spite of what one hears. When Turtzi was among the pets being blessed at the aforementioned Blessing of the Animals in Rome, a German TV guy went to pet her. He stuck his finger near her mouth and Turtzi took a nip. “She made German television,” John proudly announced. Turtles don’t have teeth but a sharp pointed beak. They will open their mouths to indicate when they have the inclination to bite. The TV guy found this out when he stuck his finger in her mouth, the Crooks surmised.

Although turtles have a natural life span of between 75 and 100 years, Miriam Crook will be the first to tell you that having a turtle as a pet is not the wisest of choices. She elaborates by explaining they are messy, must have proper food, heat, lighting, temperature, and particularly an appropriate habitat. This includes changing the water at least twice a week. The omnivorous Painted Turtle, indigenous to North America, eats, fish, fruits, berries, even canned dog food. The Crooks rely on commercial aquatic turtle food. “But I give treats like shrimp and fresh veggies. She loves carrots,” Miriam added.

Turtzi’s bathtub habitat has all the proper equipment and space, but her summertime pleasure riding on a kickboard in the outdoor family pool is a special treat. She also particularly enjoys floating on John Crook’s stomach after she has crawled aboard. It’s a photo he adamantly refused to allow taken. Just imagine a turtle in paradise, even a turtle with seemingly as many lives as a cat, and you get the picture.

In spite of all the entertainment Turtzi provides, the Crooks still maintain a turtle is not for you if you want a soft and cuddly pet. However, they do insist she has a personality of her own, comes when she is called, likes music, (“it calms her down”) knows the dogs, (“gets in their beds“) has good vision and lays eggs about five times a year. The eggs are usually buried outside and critters dig them up. Grimacing, Miriam said, “We are careful not to let our dogs get them. It would be like our pets eating each other.”

It was the late Ogden Nash who waxed poetically:

“The turtle lives twixt plated decks
Which practically conceals its sex.
I think it clever of the turtle
In such a fix to be so fertile.”