‘Johnny Appleseed’ Comes to The Alden on Oct. 20
Votes

‘Johnny Appleseed’ Comes to The Alden on Oct. 20 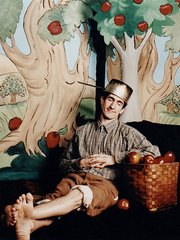 Theatre IV’s production of “Johnny Appleseed” will be presented as part of the McLean Kids Performance Series at The Alden in McLean at 2 p.m. on Sunday, Oct. 20. Tickets are $15, $10 for McLean tax district residents. The theatre is located at 1234 Ingleside Avenue, inside the McLean Community Center.

John Chapman, better known as Johnny Appleseed, was born in Massachusetts, less than nine months before and only 42 miles away from the Battle of Bunker Hill. His father was a minuteman at Concord and served in the Continental Army during the American Revolution. Johnny and his new country grew up together; he became a genuine folk hero when the “Wild West” was still Ohio. The apple orchards he planted throughout Pennsylvania, Ohio, Indiana and Illinois played a major role in the settlement of the nation. This rousing, funny musical on the new frontier is part rollicking adventure, part inspiring history and 100 percent All-American. Book and lyrics are by Connor Sykes; music is by Craig Anthony. The production is recommended for children ages 5 and older.

Tickets are on sale now. Discounts are available to seniors, students and groups of eight or more. For more information or to purchase tickets online, visit: www.aldentheatre.org or call 703-790-0123, TTY: 711.