More than 300 students participate in National Walk to School Day. 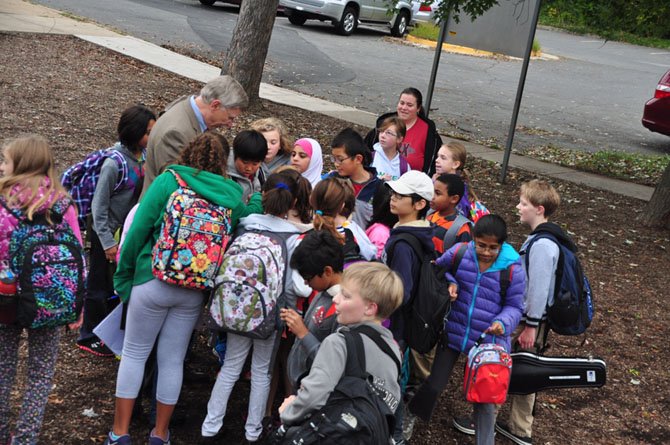 McLean — Many Spring Hill Elementary Students are used to walking to school every day, but on Wednesday Oct. 9, there was a rush hour of sorts on the paths and sidewalks as more than 300 students participated in National Walk to School Day. 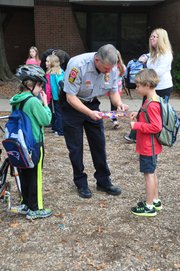 “We had about 344 kids who walked, biked or scootered to Spring Hill yesterday, not including our parents and our awesome faculty, staff and teachers that accompanied them,” said Catherine Macleod, a parent who helps coordinate the walks. “We want everyone who participates to appreciate the fact that by walking, biking, scootering to school they are making a difference, and that it’s fun doing it together. Not only are they improving their own health by exercising, but they are also helping to save the environment by reducing pollution and traffic in and around our schools and neighborhoods.”

Second grade teacher Alison Bauer helped the school begin a program that encouraged students to walk to school on the second Wednesday of every month. For National Walk to School Day, which was founded by the North Carolina-based National Center for Safe Routes to School, walking was encouraged even more and several local officials attended.

Supervisor John Foust (D-Dranesville), Janie Strauss, school board representative for the Dranesville district and Capt. Daniel Janickey, McLean District Station commander, were all on hand to greet students as they arrived.

“For total safety, we need to have everyone involved paying attention. Pedestrians need to always be on the lookout, and drivers need to be alert everywhere, from neighborhoods to busier roads,” Janickey said. “This is a year-long priority for the police department, because most of the accidents we see could be easily avoided if people were paying attention to their surroundings.”

THE SAFE COMMUNITY COALITION, a nonprofit that primarily serves the Langley and McLean High School pyramids, helped spread awareness of the event to schools in the area, including Spring Hill. They received a grant from GEICO over the summer, to expand their efforts to promote safe driving.

“We wanted to blanket the area with signs for drivers and other information to make sure people were aware of what’s happening,” said Susan Nolan, president of the SCC. “We had around nine or 10 local schools, including Chesterbook Elementary and Longfellow Middle, register for this year, and we’re hoping to grow it in the future.”

Teacher Samantha Fitzsimmons marches with a group of sign-carrying students as they sing.

As students arrived on bikes, scooters or on foot, they were able to select a charm for their backpacks indicating their preferred way to get to school, as well as a snack before the 8:40 a.m. first bell.

“We hope to encourage the students who can to walk all-year round. The school serves a pretty vast area, and we understand it’s not safe for everyone to walk, but hopefully this event at least shows people that it’s possible,” Macleod said. “In the future, we hope to grow the event and assist more students in finding safe routes.”

PRINCIPAL ROGER VANDERHYE said the addition of the light and crosswalk to Lewinsville Road in front of the school has been a big help for better access to the school.

Before it was installed students who lived in McLean Hamlet to the east made up most of the walkers. The crosswalk gives a safe access point across traffic to students that live to the north.