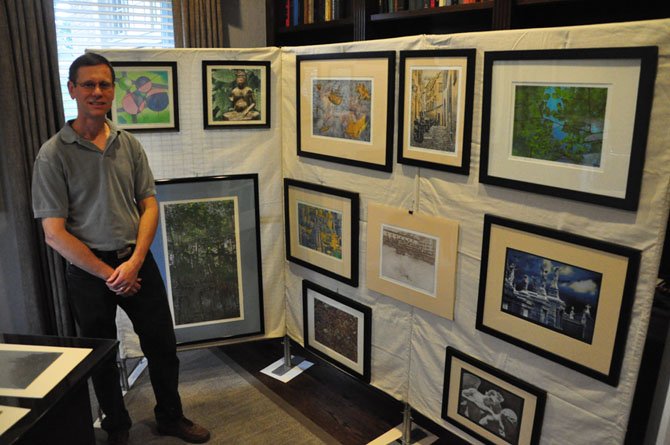 Printmaker Ralph Dashner displays some of his works along the Great Falls Studios Tour. Photo by Alex McVeigh.

“I always try to visit artists that I haven’t met before. This is my third year doing the tour, so that list is getting smaller.”

Hundreds of local art aficionados found out firsthand that Great Falls is an arts destination last weekend during the 10th annual Great Falls Studios Tour. More than 60 artists opened up their home or personal studios over the weekend to give a glimpse of the artist in their home element. 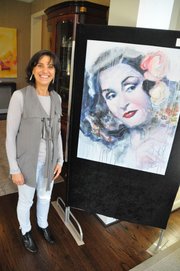 Painter Claudia Samper next to her portrait of Argentine singer Tita Merello, one of the stops on last weekend’s Great Falls Studios Tour.

“I always try to visit artists that I haven’t met before. This is my third year doing the tour, so that list is getting smaller,” said Georgia Marcus of Reston. “We usually make it to about five a day, and always as many different kinds of artists as possible.”

Painters, sculptors, jewelers, fiber artists and photographers are just a few examples of the media this year’s artists work in. Some, like Deborah McDysan, don’t limit themselves.

“I’ve been an artist since I was a kid, I attended art school, and while I was in college studying graphic design, a friend told me about her pottery class,” said McDysan, who is listed by Great Falls Studios as a potter, but also paints and makes jewelry. “I especially love the Asian aesthetic, which is apparent

McDysan’s home studio features a selection of her pottery, many of which are in a striking shade of red glaze that she says is difficult to achieve in the kiln. She also showed off a selection of jewelry and paintings.

“Right now I’m very much into watercolors, which I plan to continue with in the near future,” she said. “I like to change what I’m working on pretty regularly, I get bored pretty easily, so it’s fun to go back and forth.”

Deborah McDysan stands next to some of her pottery work during the Great Falls Studio Tour Sunday, Oct. 20.

CLAUDIA SAMPER sticks mostly to painting, a medium that she uses to explore some of her favorite things. She displayed parts of two exhibits on the tour.

“In ‘Searching for Elmo,’ I used an Elmo doll and placed it with different people in different places, and it serves as a metaphor for growing up,” she said. “Each painting tells a different story, but they all deal with that universal struggle that comes with growing older, struggles that come in any age.”

Samper said she used photographs as the base for most of her works, but only as a base.

“I don’t like to get attached to the image of a photo, so I put them aside fairly early in the process,” she said. “One thing I tried to do is put a little happiness in each painting, and show that the Elmo doll is there providing a little bit of support in each scene.”

A native of Buenos Aires, Argentina, Samper’s other exhibit, “Tribute to Tango,” features portraits of major figures in tango. Seminal performers of the bandoneon, an accordion-like instrument that is a major part of tango, such as Astor Piazzola and Anibal Troilo, are featured alongside famous performers such as Carlos Gardel and Tita Merello.

Ralph Dashner was one of only two printmakers on the tour. He said he waits for a photograph to strike him, and then his work begins.

“I start from a photograph, and I work to figure out what it is exactly that I like, and then I work to play that up visually in my print,” he said. “Sometimes it’s just a color, or a part of the composition that sticks out to me, like a photograph of New York City. I was struck by the receding depth. Or a photo of a statue at the Corcoran Gallery where the way two lines swirl really appealed to me.”

Dashner says he does most of his designs at home, and also has a studio at the Corcoran Gallery in Washington, D.C.

“What appeals to me is the combination of art, but it also has a technical side to it,” he said. “I like to be able to tinker with it until I get something I like.”

PHOTOGRAPHER RICHARD SUIB made his return to the tour this year. He was traveling in Italy and Slovenia last year during the tour, but had plenty of new photographs from that trip.

World travels aside, Suib says he gets many photographs right in his backyard, where he captures close-ups of hummingbirds near his begonias, as well as shots of birds at Great Falls Park. 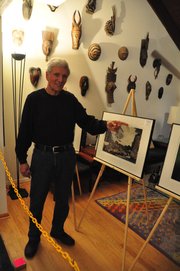 Photographer Richard Suib at his home, a stop on the Great Falls Studios Tour last weekend.

“My favorite thing to shoot is herons, they’re just spectacular birds,” he said. “They were almost wiped out a few years ago. One of my favorite photographs is of a heron on a rock near one of the falls in the park. I took the photo printed it out, and was getting ready to frame it when I noticed, for the first time, that there was a chick in the corner of the photo. It makes for a neat addition to the shot, like a hidden prize. I call it a Crackerjack Prize in that photo.”

Though herons are his favorite bird to shoot, and he loves to shoot the birds and trees in his backyard, he’s never had the chance to shoot a blue heron in his backyard.

“I’ve lived in Great Falls for 40 years, and I’ve only seen a blue heron in my backyard once, it was probably hanging out near a small pond at the end of my driveway,” he said. “And wouldn’t you know it, I didn’t have my camera equipment with me, and by the time I could get it, the bird was long gone.”