Plan must be approved by National Park Service before possible land swap. 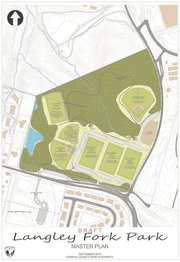 Park to Get Makeover

The Fairfax County Park Authority presented the latest draft master plan for Langley Fork Park at Franklin Sherman Elementary School Thursday, Oct. 17. The process has been going on since October 2011.

“It’s been at least 15 years talking about getting Langley Fork and investing in it, something we haven’t been able to do because the National Park Service has owned it,” said Supervisor John Foust (D-Dranesville). “I’m excited about the prospects.”

The National Park Service has managed the park since 1971. In 1980, they approached the Fairfax County Park Authority about managing and maintaining it.

“We’re very excited about this plan and what it means to the community, and the good it will do for this community.”

-- Michael Clancy, a board member for McLean Youth Athletics

THE PARK AUTHORITY developed a master plan for the park in 1980, and entered into a 25-year Special Use Permit agreement with the National Park Service. That agreement expired in 2005, and has been renewed annually every year since then.

“Over time, the government policy has changed, and they no longer offer the type of special use permit we currently have, and the conditions of that permit have really limited the park authority from doing any substantial improvements.” said Gayle Hooper, project planner with the park authority. “Eventually, an idea came up about an equitable land exchange. Nearby Langley Oaks Park is owned by park authority, but contiguous with the George Washington Parkway, which is owned and maintained by the National Park Service.”

In anticipation of such a swap, an environmental assessment of Langley Fork was completed. Part of that assessment included an archaeological study, which led to a number of discoveries.

The study found evidence that a number of prehistoric people used the area to make tools. A variety of stone chips were found as well as prehistoric hearth that was carbon dated to 300 B.C.

In formulating their new plan, Hooper said their number one priority was to find ways to put more athletic fields on the site. The Fairfax County Park Authority handles all field scheduling for the park.

According to the park authority, the past two years has seen a major increase in player registrations, and finding new playing space to accommodate these numbers has been difficult.

“We are maxed out on our scheduled fields at both parks and schools. Langley Fork is our best opportunity to meet that demand for athletic fields,” Hooper said. “Re-orienting the fields allows for more a concise development program, which allows space for two additional rectangle fields, and a full size baseball diamond.”

Synthetic turf for these fields is an option, as well as lighting on those fields outside of the park’s historic overlay district.

There are also other new elements included in the plan.

“We’ve included an element called a fitness zone, which contains some of the equipment you’d find in a gym, just outside,” Hooper said. “It provides another active recreation facility for the community. It fits very well, because teens seem to like these facilities for warming up before a game. Also, moms, dads, brothers, sisters can use them while waiting for a game or practice to finish, so we feel like that’s a great fit.”

OTHER ADDITIONS in the draft plan include two new pavilions, the addition of restrooms, two additional access points, additional parking and a trail connection that would lead to Clemyjontri Park and allow for safe crossing of Georgetown Pike.

“We also have opportunity with this plan to include an off-leash dog area. This is an item that the McLean community has been looking to establish for quite some time, and it’s nice to be able to respond to that request,” Hooper said. “It definitely is an ambitious plan that would bring noticeable changes to the park, but the benefit is, by being able to re-orient the fields, it keeps the development footprint relatively compact, which tends to reduce the overall disturbance.”

Many community members who attended a presentation of the draft plan were supportive of the plan.

“Today Langley Fork is a limited use facility that does draw many visitors for a number of active and passive activities,” said Michael Clancy, a board member for McLean Youth Athletics. “This plan builds on, and significantly builds on the present park. We’re very excited about this plan and what it means to the community, and the good it will do for this community.”

There was one omission noted by several in attendance, the addition of a running track.

“The beauty of adding a track is that it doesn’t take anything away from the existing plan, but a track can go around existing facilities,” said Katherine Quinn, head coach of McLean Youth Track. “Every child in every sport would get use out of the track, they can use it for conditioning, families can use it for activities while kids are practicing or playing games. It’s the one amenity that can be used by everyone, whether you’re a 2-year-old, a 90-year-old or even in a wheelchair, you can get out there.”

Due to the unusual nature of the ownership of Langley Fork, there will be a slight deviation in the normal master plan revision process. After the standard 30-day public comment period, the park authority will revise the plan as needed.

The draft plan will then go to the National Park Service, who will evaluate the changes to see if they are consistent with the analysis in the environmental assessment.

The park service will hold their own public comment meeting on Wednesday, Dec. 4 at Franklin Sherman Elementary School at 7 p.m.

Once the National Park Service finds the plan to their liking, the land exchange will move forward, and the master plan revision sent to the park authority board for approval.

More information on the plan can be found at HYPERLINK www.fairfaxcounty.gov/parks/plandev/langleyfork.htm.