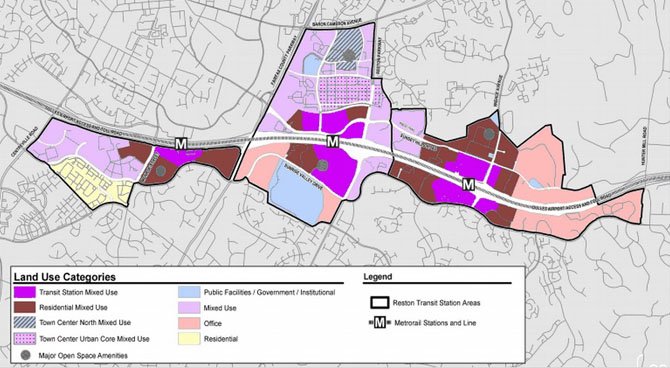 A map of the conceptual land uses around the Reston area Metrorail stations, as envisioned by the Reston Master Plan Special Study Task Force.

The task force, made up of local developers, officials and citizens, was tasked with finding a way to adapt founder Robert Simon’s original vision for the community that bears his name as it moves to the future, particularly in regards to the coming Metrorail Silver Line.

It was created in December 2009, and in Spring of 2010 subcommittees for each Reston and Herndon rail station were created, as well as a vision subcommittee. Each subcommittee is co-chaired by a developer representative and a Reston resident.

THE PLAN IS FOCUSED on excellence in design and planning around the stations as the Dulles Corridor is transformed.

Priorities for development are: housing for all ages and incomes, strengthened connectivity and mobility, high quality public open space and an emphasis on green building technology.

“The idea is to develop a vision for the existing recommendations. We’re not starting from scratch, we’re starting with the vision and principles of the existing comprehensive plan language,” said Richard Lambert of the county’s Department of Planning and Zoning. “We want to make sure new language encourages mixed uses that are unique to each station area.”

Lambert said there are several outdated elements to existing comprehensive plan language, such as plans for rapid bus transit, and language that is too general to be effective for the current situation.

“We’re trying to make this an area where the car is not the dominant mode of transportation, it’s just one option,” he said. “The idea is to put new office workers the closest to the transit station areas … the data supports the idea that workers aren’t willing to walk as far as those who reside near there, so it makes sense to put your office workforce in areas closest to the stations. If you put it too far away, it’s likely they’re not going to want to walk, they’re going to want to get in their cars.”

Patti Nicoson, chair of the task force, said part of the plan is to offer developers increased density on their properties, provided they meet standards set by the task force.

“We have different performance standards for different levels of density. If [developers] want to go above the current zoning density, which is very low, they would have to meet basic standards, such as contributing toward a grid of streets, public parks, high quality designs, those kinds of things. To get to higher densities, they’ll have to start contributing to things like a performing arts center, crossings of the toll road, building perhaps a new recreation center, contributing to the major community amenities,” she said. “We supported density for housing, trying to provide more affordable housing in the community, so if a developer were to make a significant contribution to improving this lower to mid range of housing, that might be something that would qualify them for bonus density.”

Part of the forum included a panel discussion from members of the RA, RCA and ARCH, who discussed some of the topics that were a high priority for future development.

Jerry Volloy, president of ARCH, said that flexibility will be key in future development, as well as balance between kinds of development.

Andy Sigle, vice president of the RA’s board of directors, said that the plan is to bring new residents into either the RA or the Reston Town Center Association.

“We believe one of the best ways to make sure the sense of community continues is that all new residential development in Phase One of the Dulles Corridor will be incorporated into the Reston Association or the Reston Town Center Association, depending on their location,” said Andy Sigle, vice president of the RA’s board of directors. “We are not in favor of alternative community associations within the corridor, because we feel that may have some kind of bisecting affect on the community.”

WHEN IT COMES TO NEW OPEN SPACE to go along with the new development, Terry Maynard of the RCA says they hope to work on getting more concrete language in the comprehensive plan for such spaces, especially given that new development will urbanize about 1,700 acres.

“We’ve found the language in the draft plan beyond the planning principles is kind of week,” he said. “There is a section that addresses open spaces, parks and recreation and discusses what the urban parks framework is. It characterizes the various parks, common greens, linear parks, pocket parks and so on, but it doesn’t really talk about where those should be or what those should be in Reston.”