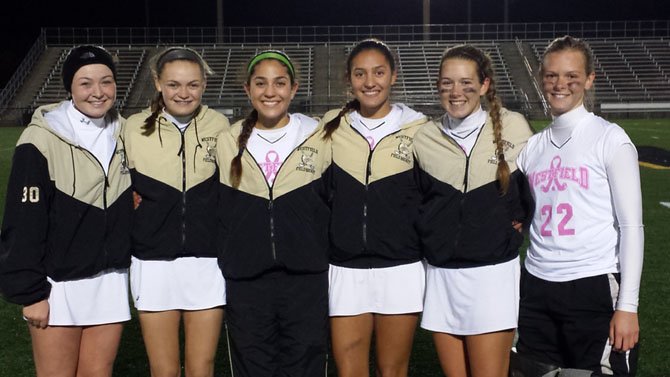 Strong team chemistry can often times propel a team to success on the field. For the Westfield field hockey team, chemistry runs deeper than time spent on the turf.

The Bulldogs have three pairs of sisters on the team, each pairing separated by two years. Five of the six sisters were in the starting lineup on Oct. 24 when the Bulldogs defeated Chantilly 3-0 during the Conference 5 tournament championship game at Westfield High School. It was Westfield’s sixth consecutive district/conference title.

“It’s awesome,” head coach Starr Karl said. “I had three sets of sisters last year, and cousins. They’re really, really good with each other because they have different dynamics. … They’re very supportive of each other and their expectations are always very high.”

Senior midfielder Katelyn Rennyson is a team captain who contributed a goal and an assist in the conference championship game. Her younger sister, sophomore Callie Rennyson, is the starting goalkeeper.

“It’s really fun,” Callie said about playing on a team with three pairs of sisters. “It’s a great experience because we’re all really close.”

Katelyn Rennyson said the sisters are supportive of one another but know how to handle times of sibling disagreement.

“I think we all challenge each other a lot because you always want to challenge your sibling. But I think we’re all supportive of each other, too. Since we’re all the same age difference … we’ve all kind of grown closer and we’re all kind of like sisters to each other. … If you’re mad at them, you just take it out on the field, like play hard against them. For me, Callie’s in goal so I can shoot harder.”

“… If you’re mad at them, you just take it out on the field, like play hard against them. For me, Callie’s in goal so I can shoot harder.”

Senior back Grace Horgan and her sister, sophomore back Sarah Horgan, are also starters. Sophomore midfielder Sara Ayoub is a starter. Her sister, senior forward/midfielder/back Becca Ayoub, is also on the team.

“When Sarah Horgan and Sara Ayoub came in [last year], they were the only freshmen that were on varsity,” Karl said “… There was a warm welcome and I think it started with their sisters making sure that they felt comfortable, because it’s hard being a freshman on a varsity team.”

“I think it’s really cool playing with all the sisters,” Katie Winesett said, “because they all know each other so well that we blend so much faster as a team.”

Karl said each sister has a different personality.

“Each of the sisters is very, very different, which is kind of cool,” Karl said. “Callie is very intense and Katelyn doesn’t let things bother her. Grace is pretty low key and then Sarah Horgan is … all over (the place). Becca is the nicest, sweetest person on and off the field and Sara is a perfectionist.”

How does it feel to win a conference championship with all the other recent Westfield accomplishments?

“It was nerve-wracking going in because we didn’t want to blow the streak,” Winesett said, “so it’s still just as exciting as winning it for the first time.”

Katelyn Rennyson, Winesett, senior back and captain Rachael Ulsh and senior back Ashley Little were named to the all-tournament team.

Westfield defeated Woodson 6-0 on Oct. 29 in the opening round of the 6A North regional tournament. The Bulldogs will host McLean in the quarterfinals at 6 p.m. on Friday, Nov. 1.