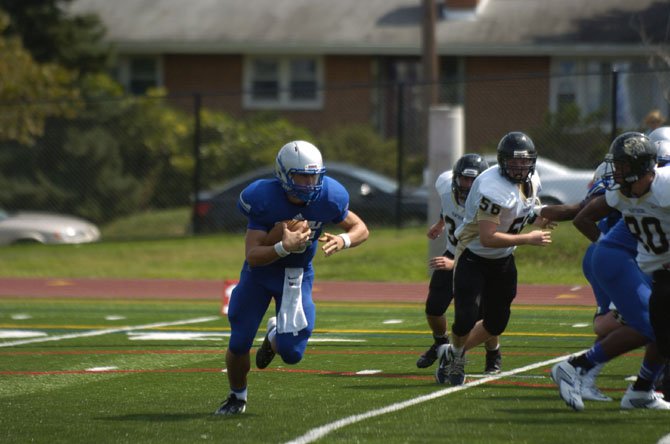 Bishop O’Connell running back Kamrin Moore rushed for 97 yards and a touchdown against Paul VI on Aug. 31.

The Bishop O’Connell football team closed its 2012 season with a 42-20 loss to rival Paul VI, leaving the Knights with a foul taste that lingered through the offseason.

Nearly 10 months later, O’Connell got another crack at Paul VI and used the opportunity to set a positive tone not only for the football program, but for the student body, as well.

The Knights scored 21 first-quarter points and cruised to a 41-0 victory over the Panthers in their Washington Catholic Athletic Conference opener on Aug. 31 at Bishop O’Connell High School.

Senior running back Kamrin Moore scored the game’s first touchdown on a 48-yard run and the Knights never looked back. Moore finished with 97 yards in seven carries. He also intercepted a pass on defense on a hot Saturday afternoon.

“It feels good,” Moore said. “This is what we prepared for. We knew it was going to be hot. We tried to get in shape as much as we could — 95 degrees is not really a football game, it’s more like a desert. … We had to make a statement because last year, we ended our season wrong versus PVI. We didn’t like it. We had a bad taste in our mouth and we came out and we had to make a statement. … This is a rival game; it means a lot to our school.”

Moore is committed to Boston College.

“Kamrin Moore, he’s a team leader and it’s not always vocal,” O’Connell head coach Del Smith said. “Every rep he takes in practice and everything he does is full speed. He gets it done in the classroom and he is the essence of an O’Connell football player.”

Junior quarterback Michael Galvan completed 8 of 12 passes for 210 yards and three touchdowns. He also rushed for 47 yards and two scores in 10 carries. Galvan found Marquis Rowe for a 16-yard touchdown with five seconds left in the first half and connected with Rowe for an 81-yard score on the third play of the second half to give O’Connell a commanding 34-0 lead.

“Michael did a great job,” Smith said. “He’s an extremely affluent and bright kid. He has over a 4.0 GPA, he has grasped the offense very well and today he protected the football and executed and I think he did a great job.”

The victory came one week after O’Connell stumbled in its season opener, losing to McDonogh 28-14 on Aug. 24.

“It’s bigger than a team win,” Smith said. “It’s kind of a school win, a program win. I told our guys all week when you open at home, especially against a rival, you have a chance to start the school year off on the right foot.”

Lawrence King pulled in a 38-yard touchdown reception from Galvan in the fourth quarter.

O’Connell will travel to face Bishop Ireton at 2 p.m. on Saturday, Sept. 7. The Knights’ next home game is Sept. 21 against Archbishop Carroll.