Riding with the Potomac Riverkeepers.
Votes

Riding with the Potomac Riverkeepers.

Keeping it Clean on the Potomac 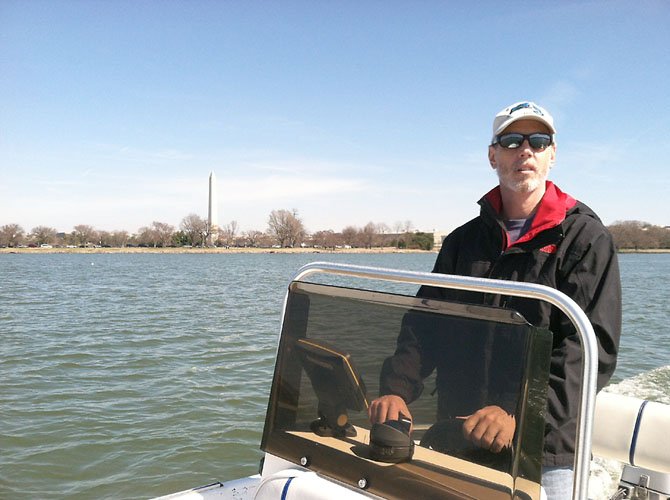 Arlington — As the late-summer waters of the Potomac flow lazily by, it’s good to know there are watchmen keeping guard over the river. These watchmen, known as Riverkeepers, patrol 383 miles of territory, the source of drinking water for almost six million people. The Riverkeepers have one mandate: To protect and preserve the quality of the water by bringing a halt to ongoing pollution in the Potomac and Shenandoah rivers.

On a recent sunny morning, President and Potomac Riverkeeper Matthew Logan and Advocacy and Outreach Manager Whit Overstreet made their morning rounds on the river. As Overstreet guided their boat out of the Gangplank Marina and pointed it downstream, the two men detailed their activities.

Potomac Riverkeepers was formed in 2000 to protect the quality of the Potomac and Shenandoah rivers and their tributaries and to ensure the safety of the drinking water. Covering a jurisdiction that ranges from Fairfax Stone in the headwaters to Point Lookout at the Chesapeake Bay, the organization is comprised of nine full-time staff members and more than 300 volunteers who wage war against water pollution, using all available means to confront offenders at the source. The group doesn’t hesitate to take legal action when necessary, but also strives to engage the community whenever possible to spot pollution and to report it.

According to Logan, the Riverkeepers’ mission is tri-fold. “We look for pollution on the river. Once we find it, we try to stop it by using whatever approach is necessary. We also try to prevent pollution before it starts,” he said.

With four full-time field staff, the group is involved daily in investigating pollution reports and policing the waters. The organization receives about 100 reports of illicit discharges each year. These can range from motor oil discarded in storm drains and hazardous debris dumped down creek to stealthy off-schedule nighttime pollution discharged by factories. The Riverkeepers often know or have a good rapport with residents and the respective environmental agencies that represent them, which aids them in their endeavor.

Riverkeepers receive reports from a multitude of sources; from boaters and fishermen to concerned citizens who call in tips. They study aerial photos. They also collaborate with local fishing guides to teach them what to look for in the water.

The Clean Water Act, which pledged to restore and maintain the integrity of the nation’s waters by preventing pollution, is the cornerstone of the Riverkeepers’ enforcement and prevention strategy. Enacted in 1972 and considered a pillar of the American environmental movement, the act established a framework for environmental organizations to pursue compliance. The Riverkeepers draw on its protocol to stop polluters from destroying the water and to force others to clean up their act.

The legislation doesn’t guarantee that pollution won’t occur, however. Reporting on pollution and standing up to large-scale polluters, some of whom send tons of toxic pollution into the water is a full-time job requiring lots of muscle. The Riverkeepers are aided in this effort by nearly $1 million in pro-bono legal services provided each year by the law firm Sidley Austin. If a polluter refuses to comply, the Riverkeepers’ legal team won’t hesitate to pursue action, something that sets them apart from many other environmental groups. They’ve found that most times just the threat is enough.

“We utilize the law to its fullest advantage,” said Logan.

Satellite technology has proved especially beneficial in determining what time of year particular pollution has been discharged. The Riverkeepers analyze the imagery by looking at whether or not there are leaves on the trees and compare the timestamp of the imagery against the meteorological record. This allows them to determine if it has rained, thus enabling them to identify what time of year the event occurred, a crucial factor in establishing the origin of the pollution.

In a recent example, a citizen alerted the Riverkeepers to the presence of a large and foul discharge in the waterfowl sanctuary adjacent to the Pentagon. The pollution plume was clearly visible even on a satellite image for a time period in which there had been no rain. Ultimately, it turned out that the Pentagon, with its own water chiller system, had been utilizing an old discharge point (outfall) while servicing their newer system. In all probability, sediment that had settled in the pipes from a different source was blown out when the old outfall was brought online. Though military and national security agencies can often carry out work under the cloak of confidentiality, they still must secure permits for their pollution discharge outfalls. The Pentagon had no choice but to allow Arlington Department of Environmental Services staff on site to investigate the source.

“In many of these instances involving military and security agencies, the usual protocol of public disclosure is not followed due to national security concerns.” said Logan, “However, at least we were able to connect a third party with the proper clearance to provide oversight.”

Added Overstreet, “It just goes to show you how complicated some of these pollution reports can be and how fortunate we are to have such a large network of partners out there to find the polluters.”

Since their inception, the Riverkeepers can point to their efforts having resulted in a 60,000 lb. decrease in annual illegal nutrient pollution discharged by a single Virginia sewage treatment plant. They were also able to order the State of Maryland to remove over six inches of lead gunshot from a Potomac tributary, Great Seneca Creek.

Powering past the Haines Point stone seawall on the south side of the Tidal Basin, Logan and Overstreet described the District of Columbia’s combined sewer system, an early sewer network designed to collect both sanitary sewage and stormwater runoff in a single pipe system. This type of sewer, no longer being built in modern communities, can adversely affect the quality of our water during large storms when combined stormwater and sewage often overrun the system.

Untreated sewage and stormwater runoff carry high levels of bacteria, including e coli. This is the reason why since 1957, swimming has been banned in the D.C. waters of the Potomac. Despite the establishment in 1959 of the Blue Plains Treatment facility, the largest sewage treatment center of its kind, heavy rains can quickly overwhelm the system. Rains regularly wash a combination of motor oil, fertilizers, chemicals and animal waste directly into the river. In fact, the state of Maryland advises all bathers to stay out of the water for at least two days following a rainstorm.

Said Logan, “It is almost inconceivable that in a country like ours we are unable to enjoy the water.”

There is some hope, however, in the form of a proposal presently being examined. To address the overflow issue, the Environmental Protection Agency is requiring the District of Columbia to fix the combined sewer problem, and the District has agreed to build three massive underground sewage tunnels, one each along the Anacostia, Potomac and Rock Creek. Construction has already begun on the Anacostia line. Pressed by the District, however, the EPA is considering delaying the mandate for construction of the other two tunnels while they install and study the benefits of “green infrastructure.” This would mean a healthy dose of “green” roofs, cisterns and barrels to capture rain on site and other environmentally friendly mechanisms to slow discharge into the water. The EPA is proposing to spend eight years studying the results to see what happens.

“We love green infrastructure, but believe it will be insufficient,“ argued Logan. “Our position is we need to do both.”

Rounding the peninsula and passing by the Lincoln Memorial, its steps descending down to the water, Logan disclosed that these days the Riverkeepers are busy pursuing an additional cause. They’re actively engaged in making the river more accessible to the community. “Our river supports local tourism, outfitters and farming industries, too,” he said. “We are working to provide better access to the Potomac and to introduce the public to this vital resource through a growing number of water activities.”

Overstreet, formerly of DC Sail, a non-profit organization that teaches sailing skills to the underserved and community at wide, is currently developing a Water Trail linking Washington D.C. with the Chesapeake Bay that includes day use and/or camping sites for the boating public. Water trails are a great low-impact use of the river and promote good stewardship along the way. Home to a plethora of local crabs, oysters and smallmouth bass too; the Potomac offers a multi-dimensional experience for boaters and fishermen alike.

“We want every local stretch of water to be swimmable, drinkable and fishable,” said Logan. “We need to start locally so all stretches of water including the Bay are clean.”

On Sept. 21 the Riverkeepers are hosting an afternoon of water fun, “Paddle for the Potomac,” at the Key Bridge Boat House. From 1-5 p.m. participants will be able to experience paddling in all of its forms, from canoeing, to kayaking and stand-up paddleboarding. World-class sportsmen will be on hand to demonstrate how to use the equipment. There will also be skill demonstrations and organized activities led by local outfitters and certified instructors.

Said Logan, “We have rights as Americans to have access to clean water. It is a basic human right. I get a visceral reaction when I see a polluter. Why does his right to pollute outweigh my right to fish or swim?”

If the Potomac Riverkeepers have anything to do with it, those polluters will soon be vacating the premises. Added Logan, “Our aim is to create a whole network of people to be our eyes, and ears on the river.”

For more information on the Potomac Riverkeepers go to http://www.potomacriverkeeper.org/. Also check out the new free app, “The Water Reporter” currently available on iPhones and iPads, which trains people how to report pollution in their area. If observing pollution, go to the app and take photos, write a short note, and GPS will locate the site and message the Riverkeepers.

Potomac Riverkeepers was recognized as “one of the best small nonprofits” by the Greater Washington Catalogue for Philanthropy.