Firefighters Hit the Streets to Fill-the-boot

Connolly praised Fairfax County fire department as “one of the best in the nation.” 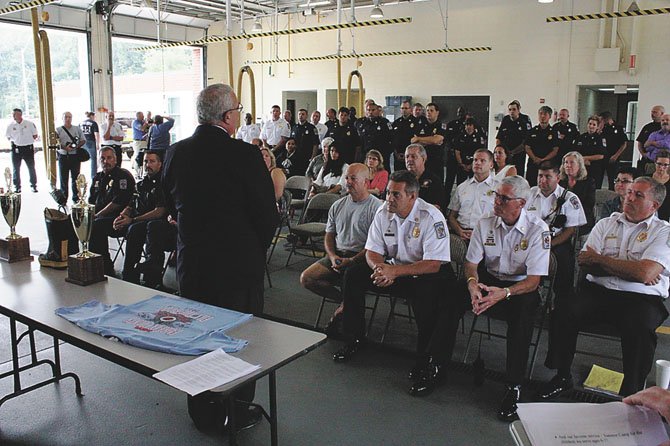 U.S. Rep Gerry Connolly (D-11) said the dedication of the men and women of the Fairfax County Fire and Rescue Department helps make it one of the best in the nation. Connolly was speaking to county firefighters, paramedics and others gathered at Fire Station 14 in Burke to kick off the annual Fill-the-Boot drive. Photo contributed

The International Association of Fire Fighters (IAFF) has been a partner with MDA since 1954 and is its largest national sponsor. Thanks to the generosity of Fairfax citizens and visitors, Fairfax County Local 2068 is the largest contributor in the Greater Washington area, having raised more than $4 million for MDA clinics, family support, and other MDA efforts in the region. Each year, the Fairfax Fire Fighters come in first or second in funds raised among IAFF affiliates across the nation.

Niemiec thanked the public for their strong support of the Fill-the-Boot campaign year after year.

Congressman Connolly said the success of the Fairfax County fire fighters and paramedics' Fill-the-Boot effort reflected their dedication to the public and to a fire department he described as "one of the best in the nation."