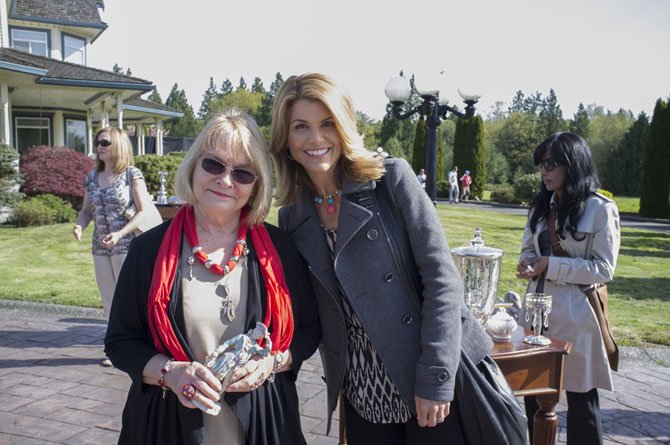 Author Suzi Weinert with actress Lori Laughlin, who will portray Jennifer Shannon, the protagonist in the movie “Garage Sale Mystery,” which is based off of Weinert’s first novel. Copyright 2013 Crown Media Holdings, Inc./Photographer Eike Schroter

McLean — Four years ago, McLean resident Suzi Weinert wasn’t sure she was capable of finishing her first book. Now she’s preparing to watch that very same book premiere as a Hallmark Channel original movie and has released its sequel.

Weinert has spent much of her life in different places, growing up in an Air Force family and marrying an Army officer, but she has spent 25 years in McLean. Her first book, “Garage Sale Stalker,” was released at the end of 2010. It tells the story of Jennifer Shannon, who loves exploring garage sales around the McLean area, much like Weinert herself.

IN THE FIRST BOOK, Shannon finds herself in trouble after exploring a sale that is a little far off the beaten path. When it came to “Garage Sale Stalker” turning into a movie, Weinert credits a fortuitous connection with the right people.

“I sent copies of the book to each of my five children, including my son who lives in San Diego. His wife has a friend in the TV business, and she read it, she told me it really had some potential to go on TV,” Weinert said. “Then a few years passed, which I thought was bad news, but I was assured that was the normal course of things.” 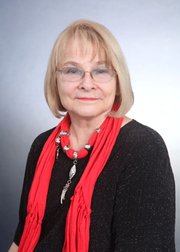 Producer Jonathan Axelrod led the project through three drafts from one writer, then four more from another writer, before finally arriving at a screenplay for the movie.

“It’s slightly different than my story, but they really did a fabulous job with it,” Weinert said. “The villain is a little different, but Jennifer Shannon and other characters are there.”

The character of Shannon will be played by Lori Laughlin, who is perhaps best known as Becky from “Full House.”

“It reminded me of ‘Murder She Wrote,’ ‘Columbo,’ ‘McMillan and Wife,’ all the shows I grew up watching,” Laughlin said of “Garage Sale Mystery” during a recent Hallmark interview. “I like mysteries anyway, and this to me wasn’t a typical Hallmark movie.” Weinert was able to watch the production of the movie for several days in Vancouver.

“It was a terrific experience, everyone there works very hard, 12 hours a day, it was almost like going to school, because I learned so much about what directors, producers and cameramen do,” she said. “They did not have to treat me as well as they did. By the time a film is made, the writer’s contribution is done, but they treated me like royalty, and even gave me my own director’s chair, and introduced me to the cast, who were all very sweet.”

One change to her novel made by Hallmark was to set the story in “more of an Anytown, U.S.A. than McLean,” Weinert said.

But McLean and its local flavor will once again feature heavily in Weinert’s sequel, “Garage Sale Diamonds.” Her character Jennifer Shannon has once again resumed her favorite hobby. This time it leads her into possession of a cache of rare, valuable diamonds, and eventually she crosses paths with their owner.

“McLean’s close proximity to the nation’s capital, not to mention as the home of things like the CIA, gives us a certain vulnerability, and Jennifer is going to be thrown into the middle of some very explosive plans from some terrorists,” Weinert said. “It’s another psychological thriller, like the first one, where we also get glimpses into the mind of the terrorist, we see how he was brought up, and the circumstances that led him never to question authority, then he meets an American who opens his mind, and all of a sudden he’s dealing with questions of his own.”

Weinert said she enjoyed returning to her characters from the first novel, likening it to seeing old friends again.

“The second book lets the shoe drop a bit on other characters that weren’t in the first one as much,” she said. “Also, much like how I went deep into the world of garage sales and antiquing in the first book, this one required a lot of research into diamonds, the history of terrorism and even Islam itself.”