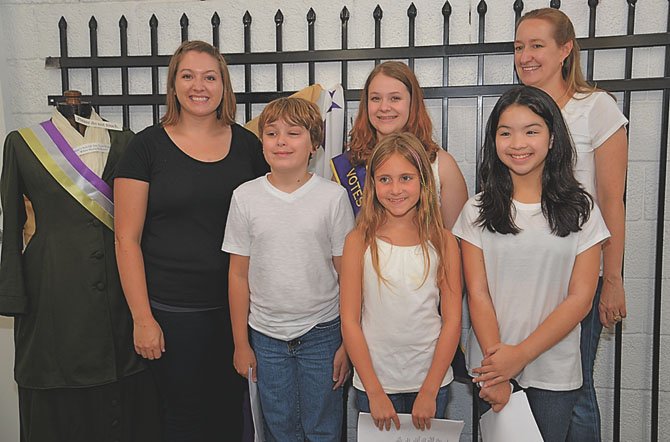 From left, back row—Abby Smith with the Metropolitan Academy of the Arts, Sam Sharrett, and Colleen Buck. Front row—Ryan Buck, Anya Jones and Amy Cooper. Sharrett, Ryan Buck, Jones and Cooper, all students at the academy located within the Workhouse Arts Center campus, performed suffragist songs for the celebration. Photo by Andrea Worker. 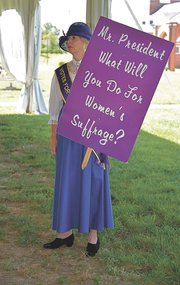 Hilaire Henthorne of Alexandria, a member of the Turning Point Suffragist Memorial Association, was one of the many volunteers who dressed for the occasion during the Women’s Equality Day Celebration at the Workhouse Prison Museum at the Workhouse Arts Center in Lorton.

Annette Mitchell of Florida admits that this information was news to her until she attended the Women’s Equality Day Celebration at the Workhouse Prison Museum Building at the Workhouse Arts Center in Lorton on Sunday, Aug. 25. Mitchell was there with her mom, Valerie, of Burke. “I grew up around here, went to school here, but I don’t recall learning much about the suffrage movement in our area,” said Mitchell. 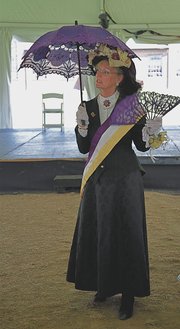 Lynne Garvey-Hodge brought the courageous experiences of the Occoquan Workhouse suffragist prisoners to life as she told their story in the persona of Mrs. Robert “Mimi” Walker who was arrested in front of the White House and sent to the Workhouse in July of 1917.

The event was a collaboration between the Workhouse Prison Museum and the Turning Point Suffragist Memorial Association (TPSMA), and one of the goals of the organizers was to shine a light on the local women who had such a major impact on the struggle to give women the right to vote. The focus of much of the day’s program was the imprisonment at the Occoquan Workhouse of numerous suffragists who were arrested, convicted and sentenced to varying terms for “blocking the sidewalks” during their protests outside Woodrow Wilson’s White House beginning in June of 1917 and culminating in what was dubbed the “Night Of Terror” by the media on the night of Nov. 14, 1917. While local suffragist Alice Paul was held in the D.C. jail, her colleague Lucy Burns and many others were sent to Occoquan on that night, where they were beaten, choked and even stabbed. They were given maggot-infested food to eat, and those who refused were forcibly tube-fed.

THE TREATMENT of the Occoquan Workhouse suffragists did not have the desired effect of ending the women’s dedication to their cause. Instead, the “Night of Terror” and the suffering these women endured has been described by many historians as the event that turned the tide in the suffrage movement. The media attention brought their fight to the national stage and within three years of their arrests the 19th Amendment was finally ratified on Aug. 18, 1920.

“That’s where we get our name from,” said Nancy Sargeant, media chair of TPSMA. The all-volunteer 501c3 has a mission to “educate, inspire and empower present and future generations” and to permanently “memorialize the suffragists whose harsh treatment at the Occoquan Workhouse … served as a turning point for the recognition of a woman’s right to vote.”

The program included the “Suffrage Prisoners at Occoquan” illustrated talk by Alice Reagan, associate professor of history at Northern Virginia Community College. Historic re-enactor Lynne Garvey-Hodge educated and entertained the gathering, appearing as Mrs. Robert Walker, one of the incarcerated suffragists, and sharing her story in the “first person.” Students from the Metropolitan Academy of the Arts, also located within the Workhouse Arts Center complex, performed suffragist songs, and staff from the museum and members of TPSMA offered photo opportunities as they strolled through the crowds with their banners and sashes, attired in period dress. TPSMA Chair Emily McCoy gave a talk about the history of the organization, and presented drawings of the planned memorial to be located in nearby Occoquan Regional Park, in partnership with the Northern Virginia Regional Park Authority.

“It’s our job to raise the funds for the memorial,” said Sargeant. “We want to be completely ready by the 100th anniversary of the ratification of the 19th Amendment in 2020—sooner if possible. Phase I is to have $1 million in the bank by 2015. We need a total of $7 million for the project, so we really are going into high gear.”

THE MEMORIAL, including a waterfall bridge, interpretive pavilion, 19 interactive vignettes, pond, period rail car and plaques to the suffragists, is being designed by architect and historic preservationist Robert Beech, who was on hand at the celebration.