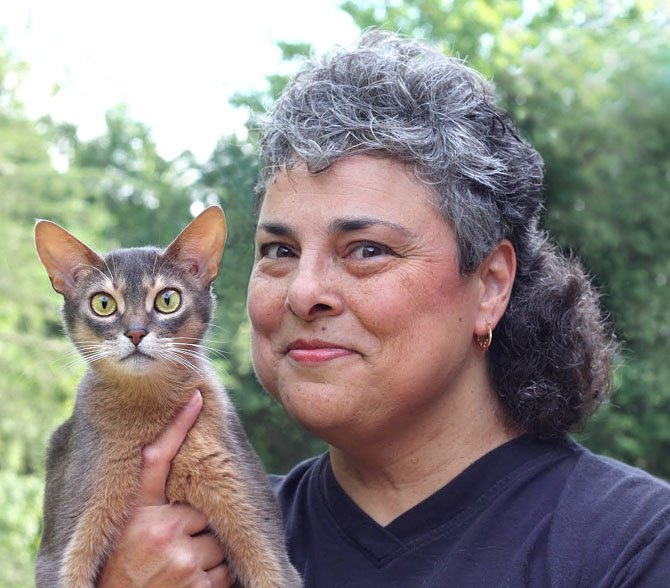 Lisa-Maria Padilla, 52, of Reston with her Abyssinian cat, Racy Mooner, at the National Capital Cat Show at the Dulles Expo Center in Chantilly over the weekend, Sept. 7-8. Photo by Jennier Jenkins

Cat trainer and breeder Lisa-Maria Padilla, 52, of Reston, appeared with her blue Abyssinian cats at the National Capital Cat Show at the Dulles Expo Center in Chantilly over the weekend, Sept. 7-8.

The show featured 450 cats from 40 pedigreed breeds from around the world — sphynx to Burmese to Maine coons to Persians — plus hybrids, crossbreeds and mutations. There were six all-breed categories, two specialty rings, household pets in eight rings, plus a display of feline agility. In addition to the cat judging, vendors sold feline products, jewelry, food and artwork. Cats were also available for adoptions.

Lisa-Maria Padilla, 52, of Reston with her Abyssinian cat, Racy Mooner, at the National Capital Cat Show at the Dulles Expo Center in Chantilly over the weekend, Sept. 7-8.

Padilla’s performance cats called “Abys” have a warm, grayish-blue coat that originated in Egypt. They are famous for doing tricks known in the animal-training field as “behaviors” — like rolling, jumping or maneuvering through timed obstacle courses. They can jump on shoulders and walk on arms, jump from pedestal to pedestal, and sit on command. They can also jump through high hoops, tunnels and steeples. They are so well trained that they even “act” in TV commercials for products like Purina cat food.

“A lot of people think cats can’t be trained,” said Padilla, originally from Los Angeles. “But they are very trainable and they can be very outgoing as well.” She says both kittens and adult cats can be easily trained, and even learn to walk with harnesses and leashes.

SHE CALLS HER PERFORMANCE CATS “Mooners in Motion.” They perform the same way that dogs do in dog shows, but on scaled-down obstacle courses. Her cat Twyla Mooner, age 9 and now retired, was the very first National Feline Agility Champion with a time of six seconds — a 2005 record. Twyla’s daughter Racy Mooner, 5, also performs and loves interacting with humans and even has her own Facebook page. The cats do feats of athleticism all over the U.S. — at cat shows in Madison Square Garden, San Diego, Orlando, Las Vegas, and the mid-West. The prize money is not huge — about $400-$500 for the agility ring — so feline connoisseurs do this mostly for bragging rights.

“Lisa-Maria is fabulous with training cats,” said Marsha Ammons, of Ft. Worth, Texas, an Allbreed cat show judge with the Cat Fanciers Association who has been showing cats for 24 years. “I own a cat I got from her and she just knows the cat’s behavior. She’s able to get them to perform.”

Pam Delabar of Finland is the past president of the Cat Fanciers’ Association, with 660 member clubs around the world. She said Padilla breeds phenomenal cats and has a very unusual rapport with them. “They’re good not only in type but in personality. [She has] almost a psychic ability with the cats,” she adds.

According to David Mare of Las Vegas, an all-breed cat judge and former president of CFA Foundation: “Lisa Maria has been training cats more than any other cat fancier, per se, and she’s extremely good at what she does. Her cats enjoy the performances and she enjoys showing them off to the public.”

In Chantilly, Padilla gave presentations in the education ring, greeted guests and interacted with children. “Cats are not just these things that sit around,” she adds. “They are real, natural athletes. And people enjoy seeing cats do athletic performances.”

TO TRAIN HER CATS, Padilla uses freeze-dried chicken treats as a reward. She shows them the treat first — if she’s training them to roll over, she’ll hold the treat over their head and use the key phrase “roll over,” and it starts to sink in. The key, she says is working with them a short time every day — maybe just two minutes a day. Twyla learned to roll over in just about a day and learned to walk with a leash in 20 minutes.

Padilla operates Hitails Abyssinians Cattery in Reston where she breeds other Abys who have one or two litters per year. She also has two retired Bengals, ages 10 and 15, which are brown-marble colored Asian leopard crossbreeds. Both Twyla and Racy are well known for their appearances at Reston Town Center, Sterling and elsewhere in Northern Virginia. Lulu Mooner, 5, the sister of Racy, is due with her next litter on Friday.

Padilla’s mother raised Siamese breeds in California where she developed her fascination with cats as a child. As a lifelong cat lover, she’s been breeding and training them now for 10 years. “When I moved out to Reston and started with the Abys, I realized that both of those breeds are active, curious and inquisitive,” she said. “I started to have a lot of fun teaching them different things. They kind of fell into doing the tricks and I started getting adept at teaching them new things.”

When she’s not breeding cats, Padilla is a feline humor writer, contributing stories to “Chicken Soup for the Cat Lovers Soul,” “All About Cats” — a magazine in South Africa, and “Cat Talk Magazine,” published by the Cat Fanciers’ Association.