Vienna Commemorates ‘A Day to Remember’ 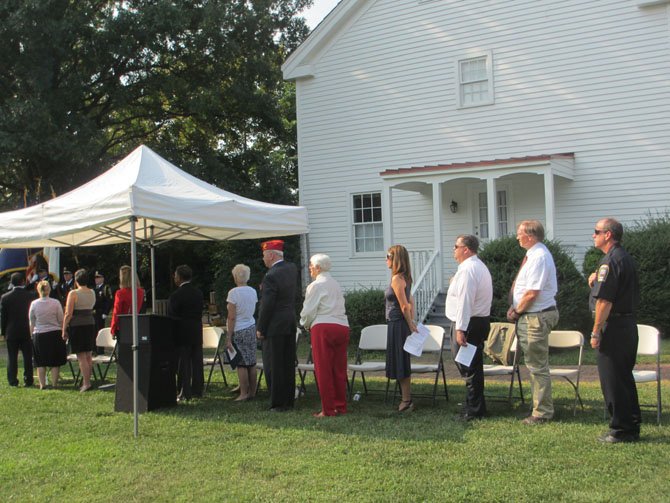 On a hot and humid September 11, 2013, people in Vienna—as they did in towns and cities across America—reflected on the horrific terrorist attack that altered the lives of Americans from that date forward 12 years ago. More than 3,000 innocent human beings lost their lives when jetliners slammed into the World Trade Center twin towers, the Pentagon and a field in Pennsylvania. Patriot Day pays tribute to lives lost, lives impacted and to the living who put themselves in harm's way to protect the nation.

The Town of Vienna and American Legion Dyer-Gunnell Post 180 of Vienna hosted "A Day to Remember," a “community commemoration,” on the grounds of Freeman House on the anniversary of 9/11. Mayor M. Jane Seeman, Town Manager Mercury Payton and Town Council members attended, as did approximately 30 area residents. Ron Miluszewski, National Sergeant-at-Arms of the American Legion and admissions director at Virginia Hospital Center on 9/11/2001, gave the keynote speech.

THE BELLS at Vienna Presbyterian Church tolled at 8:20, 9:30 and 9:45 am, in tribute to the victims of the three plane attacks.

“Men and women, good and decent people, died as a result of terrorism,” said Miluszewski, a U.S. Navy medical corpsman from 1967 to 1972. “Right here in our own backyard, the Pentagon was attacked.” Virginia Hospital Center, in Arlington, received the greatest number of Pentagon victims, 44, of any D.C. area hospital.

Miluszewski was making his rounds in the hospital, director of hospital admissions for only two months. In the outpatient surgery waiting room, people’s attention was focused on the television. A plane had crashed into the World Trade Center. The news motivated Miluszewski to review the hospital’s disaster plan. At about 9:45 a.m., the emergency department of the hospital was alerted that there was a possible plane crash at Pentagon. Almost immediately, Miluszewski said, Virginia Hospital Center implemented its code yellow, the hospital’s disaster plan. Non-critical emergency room patients were transferred, admitted or discharged to make way for the unknown number of casualties. Within the hour of the attack on the Pentagon, almost 50 physicians, more than 100 nurses and numerous support staff stood at the ready. The first patient arrived at approximately 10:35 a.m. And, then, more arrived … by emergency vehicle, by private vehicle. Casualties were color-coded according to the severity of their wounds.

“One of the most moving moments was when I noticed two young servicemen [classified as non-life threatening], each with a minor injury, watching the events at the Pentagon and the World Trade Center on the TV in the waiting room,” said Miluszewski. “As tears rolled down their cheeks, they ripped off their disaster tags and wanted to go back to the Pentagon because their comrades needed them … which they did.”

The Vienna Choral Society opened the program with the National Anthem and closed it with “America the Beautiful.” The Vienna Police Department Honor Guard, wearing heavy dark uniform, presented the colors and withdrew them.

“On that day, indeed, the hospital staff and, on a larger scale, our community, demonstrated an unshakable character and a rich fabric of unity in the wake of the disaster,” Miluszewski said. “… And, in doing so, we honored the memories of those who lost their lives.”