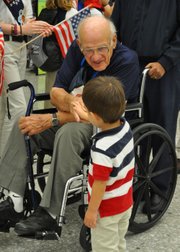 Arriving veterans shook hands with the people, especially children, in the crowd, which was around 200 strong.

On Saturday, Sept. 20, mostly on the spur of the moment, I drove out to Dulles Airport to join my daughter and 4 of her children to greet WWII and Korean War veterans flown to Washington by the Honor Flight Network. My daughter had received an email earlier in the week from a home-schooling friend to invite her to the event.

The Honor Flight Network is an organization that flies veterans to the nation's capital to see the WWII Memorial—their memorial. The organization is less than 10 years old, but has already flown nearly 100,000 vets to D.C. for a visit, one they would probably not be able to do on their own, physically or financially. What's remarkable, is that the veterans pay nothing for the trip.

Southwest Airlines, in particular, donates many of the tickets for this trip of a lifetime, and other donations help to pay expenses. Each veteran is accompanied by a “guardian” to ensure their safety and offer whatever assistance is needed to make the trip and to enjoy the visit to the memorial. In 2005 the first official Honor Flight mission began when six private planes flew 12 thrilled veterans free of charge to Manassas Airport from Ohio. The pilots accompanied the veterans via coach to the memorial. An idea which started with two dedicated individuals has been transformed into a nationwide effort that is spurred on by the fact that an estimated 640 WWII veterans die each day.

On this particular flight, many of the men were from Wisconsin, which was a happy coincidence since my father, a deceased WWII veteran, was born there. The Honor Flight Network has regional hubs that accept applications from veterans and then fly them in groups to Washington. Sadly, their website reports, sometimes the veteran has passed away by the time his name comes up for a scheduled departure. Nevertheless, there is a long list of veterans who are eager to make this journey. WWII veterans and those terminally ill are given preference.

One of the Honor Flight coordinators at the airport announced that this was the biggest group that had ever turned out for an arriving flight at Dulles. Besides interested individuals, there were many groups: Girl and Boy Scouts of all ages, American Heritage girls, Oakton cheerleaders, and a number of people in military uniform. Handheld flags waved, handmade posters were held aloft, and patriotic balloons bounced in the air. When the old warriors came into the baggage handling area, people were lined up in two rows so that the veterans entered a walkway between the waiting crowd. They were surprised and amazed by the turnout, some even teary-eyed, as they shook hands with the people, especially children, in the crowd, which was around 200 strong.

My impromptu Saturday event turned out to be a rather joyous one! When returning home rather impressed by the organization of this volunteer effort, I went to their website to learn more and have included just a bit in this article (http://www.honorflight.org/about/). Some of the video clips demonstrate the activities of the organization and the appreciation of the Veterans.

The writer is a 27-year resident of Vienna, and a retired teacher.