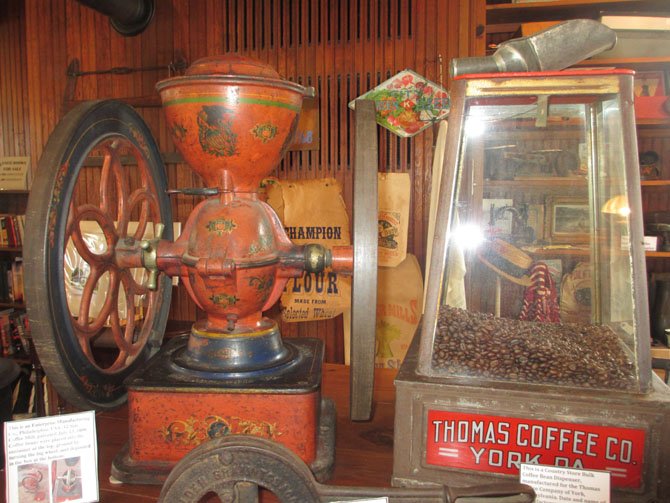 Turning the grinding wheel of this turn-of-the-19th-century coffee grinder ground the beans from the top container. Photo by Donna Manz.

For a hundred years, towns and cities across America depended on their "general" stores – or "country" stores – for food provisions, clothing and dry goods, animal feed and seeds, and small equipment to sustain the community. These shops served as a goods center, post office, local goings-on hub, and, even, a polling place. Most of these country stores are gone now, a relic of the past few know about and fewer remember. Historic Vienna, Inc., custodian of the historic Freeman House on Church Street, honors the memory of the "country store" with an exhibit of artifacts presented and identified in its very own country store.

"A goal of the HVI Museum Committee is to create a series of annual museum-quality exhibits that relate to the local area and will be of interest to a wide community of residents and visitors," said HVI Board and museum committee member, Jon Vrana. "[This] exhibit brings together pictures, objects, and stories of a part of Vienna’s rich historical heritage, the late 1800s and early 1900s, when the country store was the center of the community for so many things."

AN OPENING RECEPTION, open to the public at no charge, is scheduled for Sunday, April 6, 4 to 6 p.m. at the Freeman Store.

Vrana said the new exhibit, the History of the Country Store, is "unusual" in that the exhibit embraces both floors of the Freeman House, the store downstairs and the museum upstairs. Showcasing Freeman Store as a country store was no stretch of the imagination; it served in that capacity for more than 75 years.

HVI volunteers rearranged the first floor to emphasize important parts of a country store – the post office, the dry goods country, and the candy counter. It’s an era that most have seen in film or television or read about but have had no personal contact with.

Abram and Susan Lydecker, New Jersey merchants who moved to Vienna and built the general store on Church Street in 1859, had nine children, one of whom married Anderson Freeman. Freeman bought the wood structure, mill and land from his father-in-law in 1874. In 1890, Anderson Freeman served on the Vienna Town Council. Their son, Leon Freeman, married and later lived in the house above the store. Leon Freeman was the first president of Vienna’s bucket brigade and mayor of Vienna from 1912 to 1914. In a glass case is the satchel, checkbook, and calling card of Leon L. Freeman.

THE EXHIBIT offers a combination of posters, artifacts, and reproductions. Museum committee members pooled their talents and resources to create the nostalgic display. Vrana created more than a dozen color posters, highlighting the resources of country stores, as well as the background of the Lydecker/Freeman generations. Many of the artifacts came from HVI’s archives. David Shelby created period labels for the cans of food in the exhibit, and Mike Berger recreated a replica of the Lydecker/Freeman store as it looked during the Civil War.

"What I love about this exhibit is that because Freeman Store was a general store from the beginning, this exhibit brings it back to its roots of what it used to be," said Anne Stuntz, HVI president.